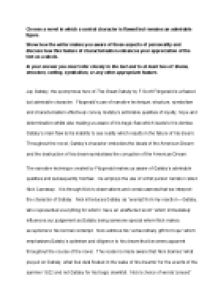 Examine the characterisation of Jay Gatsby as an admirable yet flawed character.

﻿Choose a novel in which a central character is flawed but remains an admirable figure. Show how the writer makes you aware of these aspects of personality and discuss how this feature of characterisation enhances your appreciation of the text as a whole. In your answer you must refer closely to the text and to at least two of: theme, structure, setting, symbolism, or any other appropriate feature. Jay Gatsby, the eponymous hero of The Great Gatsby by F.Scott Fitzgerald is a flawed but admirable character. Fitzgerald?s use of narrative technique, structure, symbolism and characterisation effectively convey Gatsby?s admirable qualities of loyalty, hope and determination whilst also making us aware of his tragic flaw which leads to his demise. Gatsby?s main flaw is his inability to see reality which results in the failure of his dream. Throughout the novel, Gatsby?s character embodies the ideals of the American Dream and the destruction of his dream symbolises the corruption of the American Dream. The narrative technique created by Fitzgerald makes us aware of Gatsby?s admirable qualities and subsequently his flaw. He employs the use of a first person narrator called Nick Carraway. ...read more.

As the narrative progresses rumours and speculation build about Gatsby and his wealth, effectively creating narrative tension as the reader anticipates the introduction of this mysterious character in Chapter 3. As we learn about Gatsby?s dream, we are also made aware of Gatsby?s main flaw ? his inability to see reality. Nick admires Gatsby?s ?romantic readiness? yet it is this personality trait which leads to his demise. Gatsby?s persistent faith to achieving his dream of Daisy is an obsession which he fails to relinquish even when it is clear that his dream is over and Daisy will not leave her husband. After the confrontation in the Plaza Hotel where Tom has exposed Gatsby?s inferior status and criminal connections, it becomes clear to the reader that Daisy has rejected Gatsby and is returning to Tom. Daisy is described as ?drawing further and further into herself? as Gatsby desperately tries to cling on to the remnants of their affair until eventually calling on Tom to rescue her ? ?Please, Tom! I can?t stand this anymore.? It is apparent that the affair is over yet Gatsby fails to give up hope creating a sense of sympathy for the man who gave up everything to achieve this dream. ...read more.

The fact that his house is an imitation accentuates the artificiality of his whole life which he has created with the sole purpose of capturing Daisy?s heart. He also throws large parties where ?cars from New York are parked five deep in the drive? conveying the sheer quantity of high society guests arriving from the city. Gatsby hosts these extravagant parties in order to raise his social status and in the hope that Daisy will come, yet fails to see that his dream is unfeasible. This builds a sense of sympathy for Gatsby as he is prepared to completely discard his identity in order to achieve his dream of Daisy who proves to be unworthy of such a sacrifice. Therefore the eponymous hero in F.Scott Fitzgerald?s The Great Gatsby was a flawed character who remained admirable until the end. It is through the narrator?s eyes that we are influenced to admire Gatsby?s dedication to his dream of happiness and love which in turn led to his downfall. Gatsby?s dream was corrupted by pretentiousness and material, yet he failed to realise the impossibility of his desires and died, a tragic hero, as a result. The failure of Gatsby?s dream suggests that the American Dream in general has been corrupted by greed and materialism. ...read more.