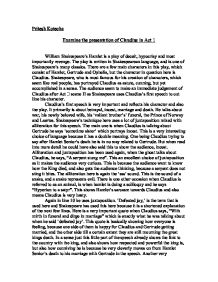 Examine the presentation of Claudius in Act 1.

Pritesh Kotecha Examine the presentation of Claudius in Act 1 William Shakespeare's Hamlet is a play of deceit, hypocrisy and most importantly revenge. The play is written in Shakespearean language, and is one of Shakespeare's many classics. There are a few main characters in this play, which consist of Hamlet, Gertrude and Ophelia, but the character in question here is Claudius. Shakespeare, who is most famous for his creation of characters, which seem like real people, has portrayed Claudius as astute, cunning, but yet accomplished in a sense. The audience seem to make an immediate judgement of Claudius after Act ( scene ? as Shakespeare uses Claudius's first speech to out line his character. Claudius's first speech is very important and reflects his character and also the play. It primarily is about betrayal, incest, marriage and death. He talks about war, his newly beloved wife, his 'valiant brother's' funeral, the Prince of Norway and Laertes. Shakespeare's technique here uses a lot of juxtaposition mixed with alliteration for this speech. ...read more.

In a sense just this little part of the speech already shows the link to the country with the king, and also shows how respected and powerful the king is, but also how conniving he is because he very cleverly moves on from Hamlet Senior's death to his marriage with Gertrude in the speech. Another very interesting line from the king is line 64 where again juxtaposition is used, but this time in a sentence, "But now, my cousin Hamlet, and my son". This is a very good contradiction as he is trying to say, just because he is married to Gertrude, he is also Hamlets father. Shakespeare very cleverly shows this as it sums up Claudius in a sentence. It shows the king to be manipulative, and powerful. There are a few other techniques used in this speech. Body politic is used in line 4 where Claudius says " brow of woe". Which shows he is a little bit upset because of his brothers death and this little sentence sums up everything. ...read more.

After talking about the marriage he moves on to war and politics, and talks about Fortinbras and war with Norway, which shows his power and respect. Then he moves onto Laertes, and he asks him for any wish he will grant. This again portrays his power. Finally he moves onto hamlet. He explains why he thinks Hamlet should not go to his university. He says "comfort of our eye" this again is ironic because the audience see him as being caring but this quote could also mean they want to keep an eye on him. Here Claudius is speaking on behalf of him and Gertrude but is actually talking about himself. In conclusion Claudius, has been presented as cunning, desperate, in a sense clever, very respected and powerful. His character also comes across as the manipulative type, and always gets what he wants and if he doesn't would go to extreme measures to get it. The repetition and the body politic in this speech is fewer than the juxtaposition and the alliteration. I think Shakespeare's combination of juxtaposition and alliteration work exquisitely together and the effects are substantial. ...read more.