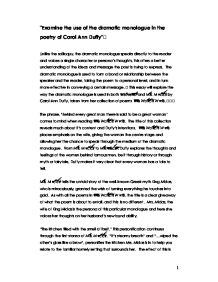 "Examine the use of the dramatic monologue in the poetry of Carol Ann Duffy" Unlike the soliloquy, the dramatic monologue speaks directly to the reader and voices a single character or persona's thoughts, this offers a better understanding of the ideas and message the poet is trying to express. The dramatic monologue is used to form a bond or relationship between the speaker and the reader, taking the poem to a personal level, and in turn more effective in conveying a certain message. This essay will explore the way the dramatic monologue is used in both Demeter and Mrs. Midas by Carol Ann Duffy, taken from her collection of poems The World's Wife. The phrase, 'Behind every great man there is said to be a great woman' comes to mind when reading The World's Wife. The title of this collection reveals much about it's content and Duffy's intentions. The World's Wife places emphasis on the wife, giving the woman the centre stage and allowing her the chance to speak through the medium of the dramatic monologue. From Mrs. Midas to Mrs. Beast, Duffy explores the thoughts and feelings of the women behind famous men, be it through history or through myth or fairytale, Duffy makes it very clear that every woman has a tale to tell. ...read more.

"...but the lack of thought for me. Pure selfishness." Duffy's feminist style of writing criticises the man as selfish and greedy, a common theme echoed throughout The World's Wife. "Duffy's women monologists are frequently powerful, vengeful women whose assertiveness, violence and aggression parodies stereotypes of male behaviour" (Jones, 2005: 158) In contrast to Duffy's male criticism, Jones believes she is empowering the women in her collection The World's Wife - I disagree. I feel that she isn't trying to parody their behaviour to the stereotypes of men's, but rather highlight their bravery and what they have to cope with on their own, I think Duffy's true message is to show just how much we as women need to deal with. The final line of Mrs. Midas, "I miss most, even now, his hands, his warm hands on my skin, his touch." brings the poem to a rather melancholy ending where Mrs. Midas, despite everything is still expressing her love for her husband and how much she misses him. Contrary to this point, Duffy has added a pun at the final two words, "his touch." symbolising both the loving and destructive touch he had on their time together. ...read more.

Most of the poem contains no rhyme but includes a rhyming couplet at the final two lines to symbolise the joy Demeter is now feeling. A sonnet seems the perfect type of structure for this poem, as it is essentially a love poem from Demeter to her daughter. The final lines of the poem brings The World's Wife as a collection full circle with the line, "in bare feet, bringing all spring's flowers" which mirrors "Out of the forest I come with my flowers" taken from Little Red Cap, the very first poem of the book, this supports Demeter's themes of rebirth and renewal. Mrs. Midas and Demeter are similar in that they are both based on mythological tales. I feel that using myth to base the dramatic monologues on creates a deeper and more fulfilling message. Both poems follow the themes of marriage, motherhood and the female voice. In terms of the structure of the mood they are both very similar, they both start off with a very heavy and melancholy tone, but end on a slightly lighter note. Duffy has used the dramatic monologue to convey her feminist message of the not so positive stereotype of men, but I feel this is to mask the deeper hidden meanings of love, relationships, betrayal and motherhood that Duffy has herself experienced. ...read more.