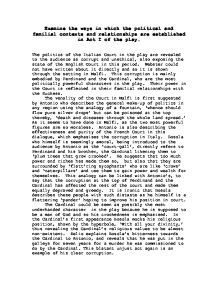 Examine the ways in which the political and familial contexts and relationships are established in Act I of &quot;The Duchess of Malfi&quot;

Examine the ways in which the political and familial contexts and relationships are established in Act I of the play. The politics of the Italian Court in the play are revealed to the audience as corrupt and unethical, also exposing the state of the English Court in this period. Webster could not have written about it directly and so it is shown through the setting in Malfi. This corruption is mainly embodied by Ferdinand and the Cardinal, who are the most politically powerful characters in the play. Their power in the Court is reflected in their familial relationships with the Duchess. The venality of the Court in Malfi is first suggested by Antonio who describes the general make-up of politics in any region using the analogy of a fountain, 'whence should flow pure silver drops' but can be poisoned at the top thereby, 'death and diseases through the whole land spread.' As it seems to have done in Malfi, as the two most powerful figures are so moraless. Antonio is also describing the effectiveness and purity of the French Court in this dialogue, which emphasises the corruption in Italy. ...read more.

Ferdinand is also clever, he can see through the flatterers in the court purposely trying to get in his favour such as Castruchio, who constantly and unnecessarily addresses him as 'my lord' and tries to dissuade him from going to war. Ferdinand recognises this and makes a mockery of him, sarcastically commenting about his pun, 'Why, there's a wit were able to undo all the surgeons of the city'. His power and control here is also made clear, as he gets angry when they laugh without him laughing, 'take fire when I give fire, that is, laugh when I laugh.'. Antonio reveals much about the brothers and the Duchess when he describes them all to Delio. He speaks freely in this dialogue as they are close friends, and so the audience gets an insight into what people truly think of them, although his description of the Duchess is biased as he clearly loves her. He refers to her as 'the right noble duchess' showing his feelings toward her. He also reveals that she does 'talk much', which would be unusual at the time as women were expected not to speak openly, as it states in St Paul, 'let a woman learn in silence with all submissiveness' summing up the attitudes of the period. ...read more.

It establishes the brother's adamant attitudes that she will not disobey them, and shows their power over her. The duchess greatly underestimates her brother's, 'let old wives report, I winked and chose a husband', and marries Antonio. Within their relationship it is apparent that the duchess is in control, as Antonio is very much in awe of her, he addresses her as 'your beautious excellence'. It is she who initiates the marriage, 'she puts the ring on his finger'. She also has to remind him that she is only 'flesh and blood' like him, and she is no better than him. The first Act establishes the authority of Ferdinand and the Cardinal and demonstrates the corruption of the court, possibly down to them as they have poisoned the fountain from the top. It reveals some of the characters as 'flatt'ring panders' such as Castruchio, Silvio and Bosola, although he is less fattering and more ambitious and decietful. It also establishes the relationship between the duchess and her siblings and shows their attempt to exert authority over her, which she unwisely ignores. Finally, it shows the nature of the realtionship between Antonio and the Duchess and that he feels very much below her (which he is in nobility). ...read more.