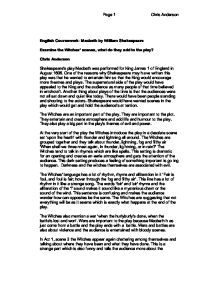 Examine the Witches&amp;#146; scenes, what do they add to the play?

English Coursework: Macbeth by William Shakespeare Examine the Witches' scenes, what do they add to the play? Chris Anderson Shakespeare's play Macbeth was performed for King James 1 of England in August 1606. One of the reasons why Shakespeare may have written this play was that he wanted to entertain him so that the King would encourage more theatres and plays. The supernatural side of the play would have appealed to the King and the audience as many people of that time believed in witchcraft. Another thing about plays of the time is that the audiences were not all sat down and quiet like today. There would have been people standing and shouting to the actors. Shakespeare would have wanted scenes in the play which would get and hold the audience's attention. The Witches are an important part of the play. They are important to the plot. They entertain and create atmosphere and add life and humour to the play. They also play a big part in the play's themes of evil and power. At the very start of the play the Witches introduce the play in a desolate scene set 'upon the heath' with thunder and lightning all around. ...read more.

These three titles represent Macbeth's past, present and future. This prophecy shocks Macbeth because he had been thinking of killing King Duncan to become King himself. Banquo challenges them to make a prophesy about him. They call him the father of future kings. Because Macbeth believes the Witches have the power of prophecy, he will later be forced to kill his friend Banquo to stop this happening. The Witches next appear in Act 3 scene 5. Some people think that this scene was inserted by another author to give the play more interest as it does not add to the plot. The scene is set again on a moor with thunder and lightning. The Witches meet with Hecate the Queen of Witches who tells them off for speaking to Macbeth about the future. She is jealous because as their Queen she was not involved. She tells them that they can 'make amends now' by meeting her in the morning when Macbeth will come to find out more. She explains that she will make Macbeth confused with 'artificial sprites'. The mentioning of these will attract the audience's attention and makes them watch closer. ...read more.

The third apparition is 'a child crowned, with a tree in his hand'. This is the weirdest one of all. The apparition tells Macbeth that he cannot be beaten 'until Great Birnham Wood to high Dunsinane Hill shall come against him'. 'That shall never be' says Macbeth and is now sure that he will be successful. Only one thing worries Macbeth. Will Banquo's children ever reign? To answer the Witches conjure up 'a show of eight kings' with Banquo following. This worried Macbeth and so he plots to kill Banquo's son. This is probably the most important scene in the play and the last we see of the Witches. This is because they have done their bit and now the audience can watch as Macbeth follows his fate. It's hard to imagine how the play could have been written without the witches because they help to create so much atmosphere and make the plot interesting. They are evil because of the way they play with Macbeth and always appear in dramatic surroundings. Without their prophecies which make Macbeth do all the things he does the play would not be so interesting. The audience have to try to work out what the prophecies mean and so stay interested until the end of the play as each prophecy comes true. ?? ?? ?? ?? Page 3 Chris Anderson ...read more.