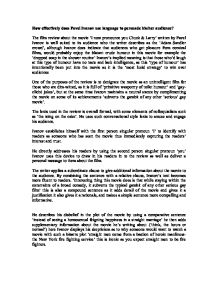 examining and exploring a review

How effectively does Pavel Ivanov use language to persuade his/her audience? The film review about the movie 'I now pronounce you Chuck & Larry' written by Pavel Ivanov is well suited to its audience who the writer describes as the 'Adam Sandler crowd', although Ivanov does indicate that audiences who get pleasure from comical films, would probably enjoy the blatant crude humour in this movie for example the 'dropped soap in the shower routine' Ivanov's implied meaning is that those who'd laugh at this type of humour have no taste and lack intelligence, as this 'type of humour' has intentionally been put into the movie as it is the 'most lucid strategy' to win over audiences One of the purposes of the review is to denigrate the movie as an unintelligent film for those who are dim-witted, as it is ...read more.

The writer applies a subordinate clause to give additional information about the movie to the audience. By combining the sentence with a relative clause, Ivanov's text becomes more fluent to readers. 'Interesting thing this movie does is that while staying within the constraints of a broad comedy, it subverts the typical gambit of any other serious gay film' this is also a compound sentence as it adds detail of the movie and gives it a justification it also gives it a rationale, and makes a simple sentence more compelling and informative. He describes his disbelief in the plot of the movie by using a comparative sentence 'instead of seeing a h********l feigning happiness in a straight marriage' he then adds supplementary information about the movie he's writing about ('think, the hours or normal') ...read more.

In the opening paragraph Ivanov uses the adjective 'energetic' and follows it up with the post-modifier 'crassness' Ivanov's constant emphasis on the vulgarity of the movie, leads the readers to consider whether they would watch such an offensive film at all, thus reinforcing Ivanov's earlier point that the movie is not worth watching as it is aimed at unintelligent audiences, and that the only basis one should watch the movie ought to be for 'academic interest'. Ivanov describes a ridiculous scene in the movie 'a three legged hippo doing ballet' his implication being that such strange humour is not only typical but it is what has made him a household name in comedies 'still an Adam Sandler movie' The text contains lots of exophoric references ('Big daddy, happy Gilmore') which have been put in parenthesis to add supplementary information. "Larry (Kevin James)" parenthesis is commonly used in the text by Ivanov to signify to audiences the formality of the review. ...read more.