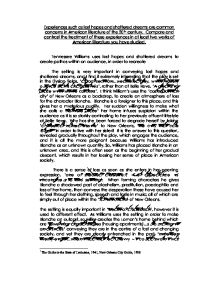 Experiences such as lost hopes and shattered dreams are common concerns in American literature of the 20th century. Compare and contrast the treatment of these experiences in at least two works of American literature you have studied. Tennessee Williams uses lost hopes and shattered dreams to create pathos within an audience, in order to recreate The setting is very important in conveying lost hopes and shattered dreams, and I find it extremely interesting that the play is set in the Elysian Fields, 'a poor section...weathered grey, with rickety outside stairs and galleries', rather than at Belle Reve, 'A great big place with white columns'. I think William's uses the 'cosmopolitan city' of New Orleans as a backdrop, to create an atmosphere of loss for the character Blanche. Blanche is a foreigner to this place, and this gives her a mysterious quality. ...read more.

her clothing, speech and taste in music; all of which are simply out of place within the 'raffish charm' of New Orleans. The setting is equally important in 'Death of a Salesman', however it is used to different effect. As Williams uses the setting in order to make Blanche an outcast, so Miller creates the Loman's home behind which are 'towering, angular shapes (housing apartments)...surrounding it on all sides' conveying they are in the centre of a fast and changing society, and yet they are clearly entrenched in the past, 'nineteen twenty-eight...when I had that red Chevvy - I coulda sworn I was driving that Chevvy today'. It is w***y Loman's maladaptive personality in particular that As two plays, we can see into the character's thoughts through monologue, which is unique to a play, as it generally does not happen in a novel. ...read more.

Blanche has such high hopes of building a new life; marrying Mitch so she can 'rest and not be anyone's problem'. Yet her path will be obstructed as she continues in her battle for control with the immensely powerful Stanley. It is, of course, inevitable that only one of them can win the battle, and despite committing r**e, Stanley is victorious because of his incriminating investigation into Blanche's past dealings with 'young boys'. Blanche is so deluded, noticeable in her singing whilst frolicking in the tub' which renders her childlike and extremely vulnerable, she has no idea of Stanley's discovery, nor the irony in her words, 'it wouldn't be make-believe if you believed in me'. This is particularly moving for the audience who know her high hopes can never be fulfilled because of her past. 1 The Guide to the State of Louisiana, 1941, New Orleans City Guide, 1938 ...read more.