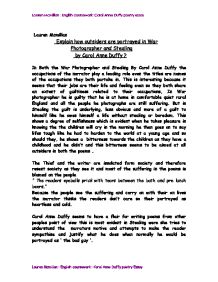 Explain how outsiders are portrayed in War Photographer and Stealingby Carol Anne Duffy ?

Lauren Mcmillan Explain how outsiders are portrayed in War Photographer and Stealing by Carol Anne Duffy ? In Both the War Photographer and Stealing By Carol Anne Duffy the occupations of the narrator play a leading role even the titles are names of the occupations they both partake in. This is interesting because it seems that their jobs are their life and feeling even so they both share an extent of guiltiness related to their occupations, In War photographer he is guilty that he is at home in comfortable quiet rural England and all the people he photographs are still suffering. But in Stealing the guilt is underlying, less obvious and more of a guilt to himself like he owes himself a life without stealing or boredom. This shows a degree of selfishness which is evident when he takes pleasure in knowing the the children will cry in the morning he then goes on to say lifes tough like he had to harden to the world at a young age and so should they, he shows a bitterness towards ...read more.

I joy - ride cars to nowhere, break into houses just to have a look.'' It is hard to establish what the message is in the war photographer at times he is praising the war photographers job And condeming the people he works for at other time he shows compassion to the victims he encounters but in the last line The narrator seems numb to what he witnesses as he works '' From the aeroplane he stares impassively at where he earns his living and they do not care'' This line defeats what he has said before when he developed the films the feelings the images conjured up made him remember the suffering he encountered but that was soon forgotten on the way to his next job he is turning in to what he condemns. The use of the word ''they'' signifies his view of society, the people that read newspapers he puts them all in the same cattergory and labels them accordingly. ...read more.

In stealing the thiefs motive seems to be lonliness and this is explored subtbly but although theres only traces of lonliness it seems to be the main theme in both the poems. Although they resent outsiders it is only because they wish they could be like the outsiders as their not doing a job which issolates them from society this jelousy also seems to be one of the themes which explain how and why the outsiders are portrayed. I can't decide if I like these poems or not I don't really feel anything for the characters Carol Anne Duffy hasn't made them likeable by not describing them and showing the bad traits of their personality which makes the poems seem gritty. There is many hidden messages which seem obvious but effective but the fact that I had to read them both five times before they made sense put me off right away.But maybe thats because im ' The cat in the hat' rhyming poem kind of a girl ! Lauren McMillan : English coursework :Carol Anne Duffy poetry essay Lauren Mcmillan : English coursework : Carol Anne Duffy poetry Essay ...read more.