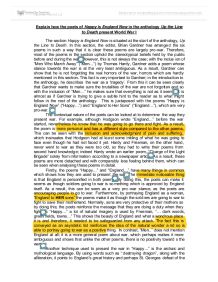 Explain how the poets of Happy is England Now in the anthology Up the Line to Death present World War I The section Happy is England Now is situated at the start of the anthology, Up the Line to Death. In this section, the editor, Brian Gardner has arranged the six poems in such a way that it is clear these poems are largely pro-war. Therefore, most of the poems in the section uphold the stereotypical beliefs held by the public before and during the war. However, this is not always the case; with the inclusion of "Men Who March Away" ("Men...") by Thomas Hardy, Gardner adds a poem whose stance towards the war is at the very least ambiguous. As a result, Gardner can show that he is not forgetting the real horrors of the war, horrors which are hardly mentioned in this section. This fact is very important to Gardner; in the introduction to the anthology, he describes the war as a 'tragedy'. From this it can be seen clearly that Gardner wants to make sure the brutalities of the war are not forgotten and so with the inclusion of "Men..." he makes sure that everything is not as it seems. ...read more.

For example, in "England..." the euphemism "beloved sleep" is used to describe death. Although the ideas of death are mentioned, they are used to signify the greatness of war and not to show it as something horrific. This can be seen with the line "Happy is England in the brave that die". By using "brave", Freeman shows that death is looked upon with happiness and that if they die, then they will know that they gave their life for an honourable cause, a cause which tried to protect their homeland. In "England..." this technique is also used: "Steeled to suffer uncomplaining/Loss and failure, pain and death". Although the issues being dealt with here are very serious, Hodgson tries to emphasise the fact that they are not in vain. By using a syndetic list and highlighting that England admires the fact that they do not complain when under hardship shows how courageous the soldiers are, that they are willing to lay down their life for their country. However, in the same poem, this stance is reversed in the last line when Hodgson says "I accept it nothing asking, save a little space to weep". Here for the first time, some of the uncomfortable aspects of the war come to the fore and because of the fact the rest of the poem is largely upbeat, it makes this last line even more hard-hitting. ...read more.

This can be seen in the poems; "England..." is a lot more personal than "Happy..." which seems more detached. The 'odd one out' is considered to be "Men..." as it is very ambiguous about the war. Many people consider it to be pro-war, but just as many believe it to portray the war negatively. In any case, it is very clear that it is written in a very different way to the other poems, this fact being emphasised by the satirical nature of the poem. It is interesting that Gardner placed this poem in this section, but what is even more interesting is that it is in second place. This is significant because after reading the "Fourth of August", the reader feels as though the rest of the anthology is going to be largely pro-war, on the basis of the first poem. However, the presence of "Men..." is a stark reminder to the reader that the anthology is not like that at all, but about the "unparalleled tragedy" which was the war, according to Gardner. Therefore, Gardner is able to make sure that the reader is not lulled into a false sense of thinking positively about the war; he wants to make sure the soldiers are remembered in the anthology, which after all, in the words of Gardner is a "tribute" to those who fought in the Great War. ?? ?? ?? ?? Osama Hamid L2 ...read more.

This is a thoughtful, well-structured essay, demonstrating genuine interest in the poems and World War One. Contextual knowledge is evident and usually used effectively, and there is some pertinent poetic analysis and knowledge of technical terminology. This could be improved by more detailed analysis of language, structure and form of the poems, and increased use of quotations which should be embedded fluently into the body of the essay.