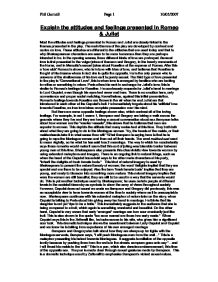 Explain the attitudes and feelings presented in Romeo &amp; Juliet.

Explain the attitudes and feelings presented in Romeo & Juliet Most the attitudes and feelings presented in Romeo and Juliet are closely linked to the themes presented in the play. The main themes of the play are developed by contrast and centre on love. These attitudes are different to the attitudes that are used today and that is why Shakespearean characters are seen to be more humorous than they are perhaps intended to be. In the opening scenes, three different kinds of love are portrayed. Sensual love is first presented in the vulgar jokes of Samson and Gregory, in the bawdy comments of the Nurse, and in Mercutio's sexual jokes about Rosaline at the expense of Romeo. After this a 'love sick' Romeo is shown, who is in love with idea of love, and believes that Rosaline is the girl of his dreams where in fact she is quite the opposite. He is the only person who is unaware of the shallowness of his love as it is purely sexual. The third type of love presented in the play is "Conventional Love", this is when love is arranged by families who are looking for allies or something In return. Paris offers his rank in exchange for Juliet's love; this is similar to Romeo's feelings for Rosaline. ...read more.

This is also shown in the quote "too soon marred are those two early made." When Capulet says this in the Zefferelli film, he looks across to his wife, who gives him a significant sour look. This dramatic technique shows the resentment between Lady Capulet and Capulet and we know he is talking from experience of his own arranged marriage. Sampson and Gregory also talk about how they are always up for fights with the Montague servants, Sampson says, "I will push Montagues men from the wall..." This is a metaphor presenting his hatred towards Montagues. It suggests humiliation of the opposite family because by pushing them from the walls in the streets. sampson goes onto say "...and I will thrust his maids to the wall." This is a pun, which also denotes embarrassment, this time of the opposite sex. The pun is made clear through sexual gestures made by Sampson. This is a dramatic technique used by Zefferelli to emphasise Sampson's violent sexual nature. Moreover, I believe that Shakespeare is specifically showing how men treated women at the time of the play and to some extent, still are, treated as objects that are to be used purely for the sexual pleasure of the male species. ...read more.

The main image that is used in Romeo and Juliet is a natural one, and it is mainly used to portray the beauty of the females in society. However, a twist is put upon the image: Sampson and Gregory talk about the beauty of women in a vulgar and violent sense. This is to show their violent and chauvinistic nature, as well as their sexual desires. These two characters symbolise and stereotype males during this period in society. Shakespeare also uses them to emphasise male dominance. The audience gets an impression of patriarchal society in general; this is because the same chauvinistic views are shown at both ends of the hierarchical system. The servants, Sampson and Gregory, share the same opinions as Lord Capulet. Romeo and Juliet show the true love that two people can share. They are presented as a constant contrast of light and dark. When they didn't have each other everything was dark and the mood was bad, however when they found each other the mood of the overall play as well as the characters brightens. Shakespeare does this to show the audience that love is not about money, status or any other conventional things; but true love is about devoted couple who share equal power. I believe that Shakespeare did this to try and educate society at the time. Phil Gornell Page 1 10/05/2007 ...read more.