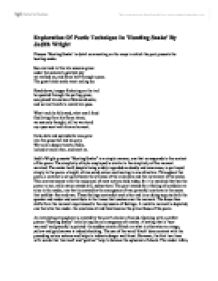 Exploration Of Poetic Technique In 'HuntIng Snake' By Judith Wright

Exploration Of Poetic Technique In 'HuntIng Snake' By Judith Wright Discuss 'Hunting Snake' in detail commenting on the ways in which the poet presents the hunting snake. Sun-warmed in this late seasons grace under the autumn's gentlest sky we walked on, and froze half-through a pace. The great black snake went reeling by. Head-down, tongue flickering on the trail he quested through the parting grass; sun glazed his curves of diamond scale, and we lost breath to watch him pass. What track he followed, what small food fled living from his fierce intent, we scarcely thought; still as we stood our eyes went with him as he went. Cold, dark and splendid he was gone into the grass that hid his prey. We took a deeper breath of day, looked at each other, and went on. Judith Wright presents "Hunting Snake" in a simple manner, one that corresponds to the content of the poem. The simplicity of style employed is similar to the simplicity of the moment narrated. The snake itself, despite being widely regarded as deadly and venomous, is portrayed simply in the poem- straight, of one soled colour and moving in one direction. Throughout the poem, a contrast is set up between the stillness of the onlookers and the movement of the snake. ...read more.

The use of the word 'flickering' refers to the contrasting and confusing emotions of fear and awe as well as adding life to an otherwise 'frozen' moment. In the second stanza, as the snake has its head down we see it as oblivious to the humans that stand watching. It does not even pause. It is completely incorporated into the natural world and this very oblivion helps in making the snake appear somewhat innocent even as it goes on to pursue its prey with 'fierce intent' in the following stanza. The beautiful description of its iridescent scales also alleviates the 'hunting' quality we will go on to witness. The core purpose of the poem, at this point, is that in order to survive some creatures do need to kill others- but this death may not be bloody murder- it is instead a vital stage in the cycle of life. Indeed as the third stanza launches the image of the hunting snake following its prey, the use of the word 'quest' is significant in reducing the conception of the snake as a cold predatory creature. The word 'quest' relates to human nature- are we all not in search of something greater? The parting grass serves metaphorically as the path of life. All creatures have a role to play in this world. ...read more.

The rhyme also makes the poem striking, accounting for the lack of unusual structure or style. In the first stanza, as the snake is introduced, the rhyme of 'sky' and 'by' is remarkable as the words are short and hence constitute a sharp rhyme. This imparts an abruptness in the leisurely flow of words created by the words 'warmed' and 'gentlest'. More so, the rhyme of 'sky' and 'by' contrasts with that of 'grace' and pace' (longer and somewhat softer words) further enhancing the feeling of shock uprooted in the reader when the snake goes 'reeling by'. The exchange of a glance between the onlookers at the end of the poem is a confirmation of their awe and wonder at the moment they shared. This silence communication enhances the concept of the failure to interact with nature. The snake moving with its 'head down' never looked up or communicated anything to the onlookers. The mesmerized awe of the onlookers is depicted in the three words 'cold dark and splendid'- their use corresponds to that of 'great black snake' earlier. Despite the recognition felt (of its role in the natural world), the snake is still cold and dark to humans. This reminder makes the reader realize, that it is only in stolen and hidden moments that the two realms of nature and the world we have created for ourselves intertwine. This entwinement is stunning at best and leaves all involved silent and daunted. ...read more.

Some excellent detailed analysis explored in this essay, demonstrating a very close reading and genuine enjoyment in exploring the poem. Textual evidence is used frequently and ideas are developed and original. There are a few points which could improve the essay:
1) The introduction needs to be more concise (see points on essay).
2) Some re-structuring of the essay would result in a more coherent piece overall. Clear topic sentences need to sign-post what will be explored in that point.
3) The writer needs to recognise that their reading of the poem is only one interpretation. Using phrases such as: 'It could be argued that/may suggest that/might imply that', take into account the multiple readings of a text.
4) Distinction needs to be made between poet and narrator.
5) Although not always relevant, contextual references can offer insights into the poem. It might be relevant to comment that Wright was an Australian environmentalist and social activist, with a keen interest in conservation.

Overall, a very good essay and enjoyable to read.