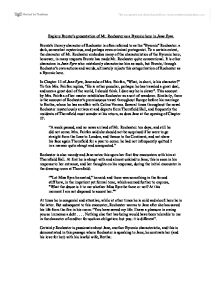 Explore Brontes presentation of Mr. Rochester as a Byronic hero in Jane Eyre.

Explore Bronte's presentation of Mr. Rochester as a Byronic hero in Jane Eyre. Bronte's literary character of Rochester is often referred to as the "Byronic" Rochester: a dark, somewhat mysterious, and perhaps even criminal protagonist. To a certain extent, the character of Mr. Rochester embodies many of the characteristics of the Byronic hero; however, in many respects Bronte has made Mr. Rochester quite conventional. It is other characters in Jane Eyre who mistakenly characterize him as such, but Bronte, through Rochester's own actions and words, ultimately rejects this categorization of Rochester as a Byronic hero. In Chapter 11 of Jane Eyre, Jane asks of Mrs. Fairfax, "What, in short, is his character?" To this Mrs. Fairfax replies, "He is rather peculiar, perhaps: he has traveled a great deal, and seen a great deal of the world, I should think. I dare say he is clever". This account by Mrs. Fairfax of her master establishes Rochester as a sort of wanderer. Similarly, there is the account of Rochester's promiscuous travel throughout Europe before his marriage to Bertha, where he has an affair with Celine Varens. Several times throughout the novel Rochester mysteriously arrives at and departs from Thornfield Hall, and frequently the residents of Thornfield must wonder at his return, as does Jane at the opening of Chapter 17: "A week passed, and no news arrived of Mr. ...read more.

. . . I should not shrink from you with disgust as I did from her." There are two effects of this passage, however, which are diametrically opposed. While this passage provides evidence of his passion and his acute sense of self-awareness about his own emotions (both characteristic of a Byronic hero), it is also indicative of the conventionalities of his character. He requires human companionship, and he ultimately dislikes isolation: at one point Rochester exclaims, "Solitude! Solitude! . . . . You [Jane] are to share my solitude". Also, Rochester desires a conventional marriage with Jane; at least, he has convinced himself that it would be a conventional marriage. Rochester's bigamy, or near-bigamy, as the case may be, provides an excellent illustration of the "Byronic" side of his character. He refuses to acknowledge the legal and moral code of the society in which he lives by refusing to acknowledge his marriage to Bertha Mason, and this simultaneously makes him unrepentant, both are qualities of a Byronic hero. He views Bertha as his ward, someone who must be taken care of, and not as his wife. He pursues Jane while still married to Bertha, because he has convinced himself that his marriage to Bertha is unrecognizable as such. Since bigamy is legally criminal (in the context here, also considered a s****l crime), Rochester also carries the burden of the guilt associated with it, yet another characteristic of the Byronic hero. ...read more.

Yet she also describes him as "radically better than most men," and through this description, that Rochester learns from his experience, she implies that he possesses self-awareness, a characteristic that is consistent with those of a Byronic hero. The most convincing evidence of Rochester's conventionality, which Bronte provides for the reader, is Rochester's own descriptions of himself. In Chapter 18, when Rochester and Blanche Ingram are bantering back and forth about the charade they have just performed, Rochester asks her, "You would like a hero of the road then?" To this Blanche replies, "An English hero of the road would be the next best thing to an Italian bandit; and that could only be surpasses by a Levantine pirate". By "English hero of the road" Blanche clearly means a Byronic hero, for it was the most notable hero in English literary history, and here Blanche implies that she views Rochester as such a character. The response that Bronte provides Rochester with, however, provides evidence that he is not so convincingly defined. He responds, "Well, whatever I am, remember you are my wife; we were married an hour since, in the presence of all these witnesses". When Rochester says, "Well, whatever I am . . .," he discretely rejects what she has implied: Blanche misunderstands Rochester's character. With his (now legal) marriage to Jane at the end of the novel and their residence at the Manor House of Ferndean, Bronte indicates that Rochester is less Byronic than he at first may appear to the reader. ...read more.