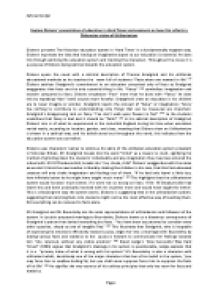 ﻿Zahraa Gooljar Explore Dickens? presentation of education in Hard Times and comment on how this reflects a Dickensian vision of Utilitarianism Dickens? presents The Victorian education system in ?Hard Times? in a fundamentally negative way, Dickens? expresses the idea that having an imaginative aspect to our education is essential. He does this through satirising the education system and mocking the characters. Throughout the novel, it is a purpose of Dickens being satirical towards the education system. Dickens opens the novel with a satirical description of Thomas Gradgrind and his utilitarian educational methods as he teaches the room full of students ?Facts alone are wanted in life? (9) Dickens satirises Gradgrind?s commitment to an education comprised only of facts as Gradgrind exaggerates that facts are the only essential thing in life. ?Fancy? (14) symbolises imagination and wonder compared to facts. Dickens emphasise ?Fact? more than he does with ?Fancy? he does this by repeating ?fact? itself, sounds more forceful. Gradgrind's view on education is his children are to never imagine or wonder. ...read more.

Not everything can be reduced to facts alone. Mr Gradgrind and Mr Bounderby are the main representations of utilitarianism and followers of the system. In Louisa?s proposed marriage to Bounderby, Dickens shows us a disastrous consequence of Gradgrind?s system that denied everything but facts. ?You have been accustomed to consider every other question, simply as one of tangible Fact? (97) This illustrates that Gradgrind, who is incapable of expressing his emotions effectively toward Louisa, edges her into a marriage with Bounderby by stating various facts and statistics to her. Louisa is hesitant to communicate her feelings towards him ?she returned, without any visible emotion? (96) David Lodge?s ?How Successful Was Hard Times?? (1981) argues that Gradgrind?s ideology in his system is questionable, Lodge explains that it is a ?primary index of what is wrong with his system? Mr Bounderby is also a character with utilitarian beliefs, doubtlessly one of the major characters that has a firm belief in the system, ?you may force him to swallow boiling fat, but you shall never suppress force him to suppress the facts of his life? (23) ...read more.

Dickens uses Bitzer to demonstrate that other students are influenced by him, showing that he is a follower of Gradgrind?s system, whereas Sissy is the foreigner to the system. The Utilitarian education system relates to the industrial town ?Coketown? which consists of factories and ?large streets ... like one another ... people equally like one another? (27) The town is linked to a ?painted face of a savage? (27) that is described as barbaric and uncultured, the children are being deprived from the ?ill-smelling dye? (27) Dickens suggests the society that the children/workers are living in is unsanitary ?Jail? (28) indicating that they have no escape from their problems. The utilitarian system stamps out all imagination in the pupils and prepares them perfectly for the life of drudgery. Dickens describes as their lot as ?hands? in Coketown?s factories. Education presented in 'Hard Times' is shown as satirical in Dickensian vision of Utilitarianism. This is because Dickens is able to create a fool out of the system cunningly. Furthermore it is certain that what Dickens has presented is humorous and convincing with making the utilitarian ideology seem absurd through the novel. I find David Lodge?s argument towards Dickens opinion as liberal and potent. Page ...read more.