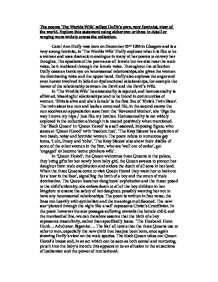 The poems 'The Worlds Wife' reflect Duffy's own, very feminist, view of the world. Explore this statement using either two or three in detail or ranging more widely across the collection. Carol Ann Duffy was born on December 23rd 1955 in Glasgow and is a very strong feminist, in 'The Worlds Wife' Duffy explores what it is like to be a woman and uses dramatic monologue in many of her poems to convey her thoughts. The speakers of the poems are all female but we also hear the male voice, be it mediated through the female voice. Throughout the collection Duffy casts an ironic eye on heterosexual relationships; she gives the woman the dominating voice and the upper hand. Duffy also explores the anger and even horror involved in failed or dysfunctional relationships, for example the horror of the relationship between the Devil and the Devil's Wife. In 'The Worlds Wife' heterosexuality is rejected, and homosexuality is affirmed. Meaningful relationships tend to be found in communities of women. 'Elvis is alive and she's female' is the first line of 'Elvis's Twin Sister'. ...read more.

Bigamist ... The Rat' all terms that the three Queens use to refer to men, especially the new child that has just been born, once again showing Duffy's view on the male species. The black Queen takes out Queen Herod's breast and, in an act which can be seen as both s****l and nurturing, puts it into the baby's mouth; this appears to be an allusion to the attractions of lesbianism and the power of motherhood. 'The Kray Sisters' explores the criminal underworld that the Kray Sisters rule in; the sisters are clearly supporters of the women's movement. The poem begins with the sisters recalling what their lives used to be like and the impressions that they made on the local 'geezers'. The image of them 'walking down the frog and toad' with men shouting at them immediately strikes a tension between the masculine and the feminine. Typical male clothing, 'a whistle and flute' becomes translated into a bolder feminine stance to 'flatter' their 'thr'penny bits'; this image conjures thoughts of cross-dressing. The use of a single voice throughout the poem avoids the use of dialogue and accentuates their sisterhood and commitment to feminism. ...read more.

Elvis was not only a s*x symbol, but had a reputation as being a womaniser, Duffy conveys her thoughts on this man and how he treated women with a careless disregard and did not give them respect. To conclude many poems in Duffy's collection explore her feminist views. In 'Queen Herod', we are shown how a radical feminist wants to protect her daughters from male domination so much that she is willing to kill every boy child in the land, just so that her daughter's identity is not over-powered by the ego of a man. 'The Kray Sisters' explores Duffy's view by showing that women can do the same things as men, and how women, such as the Suffragettes, fought for women's rights, without these people women would have no rights, the poem, in some way, pays tribute to 'Vi' who fought for women today. In 'Elvis' Twin Sister' we are shown how women are the reason why some men are so famous, this is also the case in 'Mrs Darwin', who claims to have started the idea of the Theory of Evolution in Darwin's mind. Duffy's poems are all very feminist and she shares her views through humorous, yet sometimes aggressive, tone. ...read more.