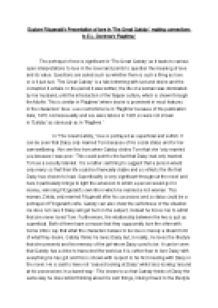 ﻿Explore Fitzgerald?s Presentation of love in ?The Great Gatsby,? making connections to E.L. Doctrow?s ?Ragtime.? The portrayal of love is significant in ?The Great Gatsby? as it leads to various open interpretations to love in the novel and points to question the meaning of love and its value. Questions are asked such as whether there is such a thing as love or is it just l**t. ?The Great Gatsby? is a tale brimming with l**t and desire and the corruption it entails. In the period it was written, the life of a woman was dominated by her husband, until the introduction of the flapper culture, which is shown through the Myrtle. This is similar in ?Ragtime? where desire is prominent in most features in the characters? lives. Less restrictions lie in ?Ragtime? because of the publication date, 1975. Homosexuality and s*x were taboos in 1920 so were not shown in ?Gatsby? as obviously as in ?Ragtime.? In ?The Great Gatsby,? love is portrayed as superficial and selfish. It can be seen that Daisy only married Tom because of his social status and for her own wellbeing. We see this from when Gatsby chides Tom that she ?only married you because I was poor.? This could point to the fact that Daisy had only married Tom as a security blanket. ...read more.

This is in stark contrast to Daisy?s description, showing us that Myrtle is not Tom?s usual ?type.? The adverb ?sensuously? can bring the reader to assume that this is why Tom chose her as his lover. This also can imply that Myrtle, as in 1920?s America, had followed the new Flapper culture whereby women had started to peel away from the natural way of life and assumed their own independence through the way they dressed and acted. This is significant to the way the whole novel flows because l**t is the basis for this relationship and when Myrtle dies we do see the effect it had on Tom as ?he was bending over it (the body), motionless,? showing that although Tom didn?t love Myrtle, he did have feelings for her. This, again, is parallel to Ragtime. The contrast of the Eskimos and the relationship Father has with Mother shows that in white America, Mother is the object of Father?s s****l needs. We are told that Mother has a ?fastidiousness? nature as opposed to the Eskimo woman who ?actually pushed back? implying that Mother is quick to please her husband with what he wants. It also suggests that Father is shocked by the addition of ?actually,? showing that he is surprised and it is not usual in the time period or in America. ...read more.

Then later on in the chapter Myrtle is seem to ?walk through her husband as if he were a ghost,? showing that he is hopeless to stop her and also she is the dominant one in their relationship. This is strange because in the 1920?s women would have been expected to respect and obey their husbands. The relationship between Mother?s Younger Brother and Evelyn Nesbit is seen to parallel this. We are told of Mother?s Younger Brother as waiting on Nesbit ?in his doggish silent way.? It shows that in both cases a woman domineering over a man was strange and that both were inefficient to tell the woman they loved to stop. In conclusion, love is tainted by all aspects of the lives the characters lead, be it s****l desires or personal benefit. All the relationships in The Great Gatsby lead to failure as they are not fundamentally based on love but a burning desire for money or l**t. There is no such thing as a pure, untainted love in The Great Gatsby and that in itself shows what their lives must have been like. The relationships of all the characters go some ways into the tragic ending of the novel and the consequences of these final events. ...read more.