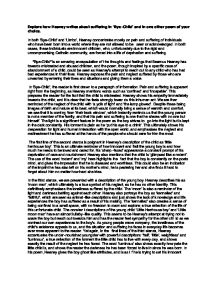 Explore how Heaney writes about suffering in 'Bye-Child' and in one other poem of your choice.

Explore how Heaney writes about suffering in 'Bye-Child' and in one other poem of your choice. In both 'Bye-Child' and 'Limbo', Heaney concentrates mostly on pain and suffering of individuals who have been born into a world where they are not allowed to be seen or acknowledged. In both cases, these individuals are innocent children, who, unfortunately due to the rigid and uncompromising Catholic community, are forced into a life of deprivation and suffering. "Bye-Child" is an amazing encapsulation of the thoughts and feelings that Seamus Heaney has towards mistreated and abused children, and the poem, though inspired by a specific case of abandonment of a child, could be seen as Heaney's attempt to reach out to any child who has had bad experiences in their lives. Heaney exposes the pain and neglect suffered by those who are unwanted by entering their lives and situations and giving them a voice. In 'Bye-Child', the reader is first drawn to a paragraph of information. Pain and suffering is apparent right from the beginning, as Heaney mentions words such as 'confined' and 'incapable'. This prepares the reader for the fact that the child is mistreated. Heaney shows his empathy immediately towards the child, and it is clear that he feels strongly towards this inhuman act. We are then reminded of the neglect of the child with 'a yolk of light' and 'the lamp glowed'. Despite these being images of birth and nature at its best, which would normally bring a sense of warmth and comfort, we ...read more.

This shows that the young boy knows no more than darkness, and pursues his dreams of finding light. He has nothing to look forward to, and is a true expression of his minimal existence at the hands of his suffering. The final stanza in 'Bye-Child' concentrates on the discovery of the child. Heaney mentions that he 'speaks with a remote mime'. This shows us the result of his cruel neglect, and the fact that he can't talk proves this. The effect of his neglect is clearly shown in the bodily image of the young child upon his discovery. His existence is with 'something beyond patience', which shows the awful extent of his suffering, as no one can understand his situation, his 'gaping wordless proof' a true reflection of the lack of love shown to him. Heaney also mentions the 'lunar distances' faced by him, which shows the reader that he does not believe in God and that he worships the moon, which is ironic as it is God and religion that has placed him in this neglectful situation in the first place. The moon imagery also is a suggestion that maybe he doesn't belong on earth, as he is born out of wed-lock. The fact that he has 'travelled beyond love' gives the idea that he is soon about to die, or that he will find love somewhere, that the love used to produced him was wrong and unacceptable in the harsh religion enforced on the one who bore him. ...read more.

Heaney also mentions the extent of the neglect in the fact that 'even Christ's palms, unhealed, smart and cannot fish there'. The extent of the suffering is portrayed in the fact that despite Christ dying for us, he can not help in this inhumane situation and the 'unhealed' suggests Christ's pain and suffering too at the fact that he can not do anything to prevent this from happening. This is again highlighted in the use of the word 'smart', which could be a sharp pain yet again felt by Christ, and reminds the reader that the situation is out of his hands. The true reflection of suffering comes in the final words of the poem, that Christ 'cannot fish there', a clear indication that society is being destroyed by rules that were made to protect individuals, but instead are causing them pain and suffering, emotional scars that they will have to live with forever. The poem is divided into five stanzas, which reflects the ongoing pain and suffering felt by the mother as she is ducking her child under the water. There is also an enjambment in the last stanza, which gives power of emotion in the move between verses. The last line is a crucial one as it describes and portrays the suffering and wrong doing of the situation by also summing the poem up. Each stanza is four lines in length and there is no rhyme, which shows that the situation in Ireland was out of control. ...read more.