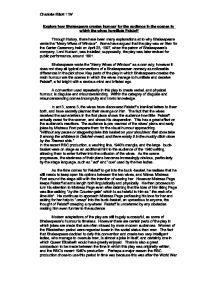 Explore how Shakespeare creates humour for the audience in the scenes in which the wives humiliate Falstaff.

Explore how Shakespeare creates humour for the audience in the scenes in which the wives humiliate Falstaff Through history, there have been many explanations at to why Shakespeare wrote the "Merry Wives of Windsor". Some have argued that the play was written for the Garter Ceremony held on April 23, 1597, when the patron of Shakespeare's company, Lord Hudson, was installed; supposedly, the play was later revised for public performance, around 1601. Shakespeare wrote the "Merry Wives of Windsor" as a comedy, however it does not obey all typical conventions of a Shakespearean comedy as noticeable differences in the plot show. Key parts of the play in which Shakespeare creates the main humour are the scenes in which the wives manage to humiliate and deceive Falstaff, a fat knight with a devious mind and inflated ego. A convention used repeatedly in this play to create verbal, and physical humour, is disguise and misunderstanding. Within the category of disguise and misunderstanding comes incongruity and ironic knowledge. In act 3, scene 3, the wives have discovered Falstaff's identical letters to them both, and have secretly planned their revenge on him. The fact that the wives received the same letters in the first place shows the audience how little Falstaff actually cared for the women, and shows his desperation. ...read more.

The hassle and aggravation of Ford's reaction was so well staged that Falstaff's brief exit to change into his disguise was almost forgotten. The parts of the wives in these two scenes are extremely important, as their innuendos are intended to be a basis for later comedy. Their lines in front of Falstaff are like another play in themselves. The audience is often meant to laugh with the wives, as Shakespeare has created these two characters to make a large part of the humour. There are examples of obvious dramatic irony in the form of hidden jokes between them, when Falstaff doesn't know Mistress Page is around, Mistress Ford refers to her as a "very tattling woman". The sheer absurdity of Falstaff's disguise as he entered on the stage, dressed as the "fat woman of Brentford" undoubtedly brought entertainment to the audience in the RSC production, and the lasting embellishment of Ford beating Falstaff with a walking stick was a great example of visual slapstick comedy. However is it not only the RSC production that chose this as a point of exuberance, Shakespeare has some obvious indications by the wives and Ford himself in the script, which suggest Ford's hate for "Mother Pratt", and the trouble that Falstaff will cause for himself. ...read more.

Herne the hunter is said to have been a spectral hunter and keeper in Windsor forest in medieval times. Mistress Page tells a version of the hanging of Herne the hunter earlier in the play. This part of the play is certainly very comical, as it is an deception by the wives and their husbands for Falstaff to be dressed as a "cuckold", someone who has a s****l affair out of marriage, thought in Pagan times to have grown horns and turn into part deer, part man. The final scene, when the fairies torture Falstaff, seems like a scene of comedy rather than one of grief or sympathy. There is the added hilarity of Doctor Caius and Slender whisking away the wrong person, and finding themselves marrying a boy, instead of Anne Page. The play concludes as an entirely happy ending as Ford includes "Sir John and all" in his final speech. Although this is a rather unconventional comedy in some ways, the ending still consists of the protagonist overcoming the antagonist, creating a happy ending. It is also a farce due to the improbably and ludicrous events that take place throughout. Shakespeare's great uses of comedic structures are extremely successful in creating not only a great comedy, but also one that has lasted the test of time. Charlotte Elliott 11W ...read more.