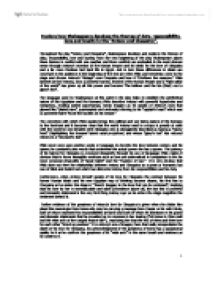 Explore how Shakespeare develops the themes of duty

Explore how Shakespeare develops the themes of duty, responsibility, love and loyalty in the "Antony and Cleopatra". Throughout the play "Antony and Cleopatra", Shakespeare develops and explores the themes of duty, responsibility, love and loyalty; from the very beginning of the play Shakespeare places these themes in conflict with one another and these conflicts are embodied in the most obvious sense through Antony's rejection of the Roman Empire and its ideals for the love of Cleopatra and a far more frivolous laid back life in Egypt. And in turn these differences in ideals are conveyed to the audience in the beginning of the first act when Philo and Demetrius come to the stage and discuss Antony's "dotage" over Cleopatra and how it "O'erflows the measure." Philo laments at how Antony, once a powerful warrior, triumvir of the Roman Empire and a "triple pillar of the world" has given up all this power and become "the bellows and the fan [that] cool a gipsy's l**t". The language used by Shakespeare at this point in the play helps to establish the antithetical nature of the Egyptians and the Romans; Philo describes Antony with powerful hyperboles and metaphors, evoking potent superhuman, heroic imagery as he speaks of Antony's eyes that glowed like "plated mars", passionately and verbosely referring to his "captain's heart" which was so powerful that it "burst the buckles on his breast." ...read more.

than the aforementioned pontificating diatribe. Enobarbus, a Roman, sheds new light on the queen, presenting her as a passionate and loving woman capable of "greater storms and tempests than almanacs can report"; this metaphor relates the relentlessness of Cleopatra's emotions to the harshness of a storm. However as much as she is Antony's lover, she is also the woman who constantly tests his loyalty towards her. She does not understand why Antony takes orders from the "scarce bearded" Caesar and as such manipulates and beguiles him into sending away the messengers that have come from Rome by accusing his romantic advances of being little more than an "excellent falsehood." Ironically it is Cleopatra herself who is well versed in falsehood, pretending to be sick in order to play with Antony's emotions, using the very nature of their relationship against him and this is made clear when she asks Antony "why should [she] think [he] can be [hers] and true...who have been false to Fulvia" and deliberately ignoring and interrupting him the fact that he has duties to attend to; from this it becomes clear that Cleopatra represents a force pulling Antony away from his duties as a politician. Consequentially Antony finds himself facing conflicting loyalties since the message of his wife Fulvia's death in the first Act Antony has been becoming far more serious, even in the way he addresses his best friend Enobarbus. ...read more.

The language that he uses evokes typical roman imagery of war and fortitude whilst alluding to the contradictory theme of private matters of the heart as Caesar does not want his virtuous sister, within whose eyes lie "love's spring" being something over which the newly renewed bond is broken. Caesar's uncharacteristic use of romantic language and display of emotion make the dramatic irony in this scene even more potent as later on in the play Antony returns to Cleopatra, betraying Caesar. Shakespeare has used Caesar in this scene to develop the themes of loyalty and duty, at this point in the play, the audience is invited to question whether Antony's marriage to Octavia is one of love or one of duty, and when looked at in comparison to his relationship with Cleopatra, the latter is confirmed to be true. In closing, Shakespeare develops the theme of duty, love, loyalty and responsibility in a number of ways as the play progresses, primarily his use of character and language are the tools that Shakespeare uses the most, setting up characters as representations of these themes through the way in which they speak and act; using powerful language and imagery to eloquently evoke these themes through the use of allusions to things greater than themselves. These themes are often put in direct conflict with one another and at other times manifested within characters that they would ordinarily contradict, further adding to the underlying dissonance that relates all these themes back to one another. ?? ?? ?? ?? 1 ...read more.