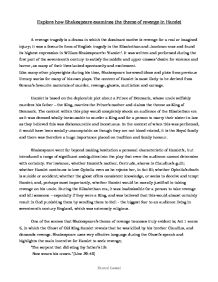 Explore how Shakespeare examines the theme of revenge in Hamlet

Explore how Shakespeare examines the theme of revenge in Hamlet A revenge tragedy is a drama in which the dominant motive is revenge for a real or imagined injury; it was a favourite form of English tragedy in the Elizabethan and Jacobean eras and found its highest expression in William Shakespeare's: 'Hamlet'. It was written and performed during the first part of the seventeenth century to satisfy the middle and upper classes' desire for violence and horror, as many of their lives lacked spontaneity and excitement. Like many other playwrights during his time, Shakespeare borrowed ideas and plots from previous literary works for many of his own plays. The content of Hamlet is most likely to be derived from Seneca's favourite materials of murder, revenge, ghosts, mutilation and carnage. Hamlet is based on the deplorable plot about a Prince of Denmark, whose uncle selfishly murders his father - the King, marries the Prince's mother and claims the throne as King of Denmark. The content within this play would completely shock an audience of the Elizabethan era as it was deemed wholly inexcusable to murder a King and for a person to marry their sister-in-law as they believed this was dishonourable and incestuous. In the context of when this was performed, it would have been socially unacceptable as though they are not blood related, it is the Royal family and there was therefore a huge importance placed on tradition and family honour. ...read more.

Our reaction would have also been different because as a country we have become secular, and so I don't think we as an audience would have taken the Ghost seriously as we don't in every respect believe in spirits. Elizabethans believed that not only did Ghosts and spirits make appearances, but that they were vital as they played the role of the messenger. They therefore would have been gripped and it would be more credible for them. On the other side however; Hamlet is scared and indecisive about his dilemma to seek revenge. The Divine Right of Kings meant that the King was ordained by God and if you murdered a King, you would surely go to h**l. 'O all you host of heaven! O earth! What else?' [Line 92] His emotion is displayed by punctuation and repetition, and his worries of seeking revenge and being punished cause the delay. Throughout this scene, we also take part in Hamlet's internal confusion of how to exact his revenge. This may provide an explanation for some critics, such as Samuel Johnson, who question why Hamlet is, throughout the whole play, rather an "instrument than an agent". I agree because after he has convicted the King, he makes no attempt to punish him, and Claudius' death is at last affected by an incident which Hamlet has no part in producing, but seizes the moment. ...read more.

I think Shakespeare is therefore successful as we do pity Hamlet because he does want to kill Claudius but his orthodox Christianity and strict moral codes acts as a barrier - his tragic flaw is procrastination. We are also scared of his 'bad' side which is when he kills Polonius, attacks his mother and rejects Ophelia. Shakespeare uses a number of antitheses; evil vs. good, life vs. death, secular vs. religion and so on and the audience is left to decide which successes over the other. I think Shakespeare constructs Hamlet's character so that the audience could become him, it is natural for us to question ourselves when faced with a dilemma as imperative as his. We understand his procrastination, but on the other hand his character does raise many questions that remain unresolved even by the end of the play. For example, we question whether his love for his mother and jealousy of Claudius is simply an Oedipus complex - especially as scenes in the film and stage directions of his actions are ambiguous causing us to be unsure of what he's actually doing to her. Overall, an audience of any century, can relate to him and he becomes a believable psychologically developed character, unlike the others who seem to me to be caricatures and representatives of certain types of people. Word Count: 1,715 A website: http://people.brandeis.edu/~teuber/earlycrit.html http://www.britannica.com/eb/article-9063348/revenge-tragedy http://en.wikipedia.org/wiki/Revenge_play A book: Gill, Roma ed., 'Hamlet' (Oxford School, Shakespeare), Oxford University Press, 2007 ?? ?? ?? ?? Dunni Lawal ...read more.