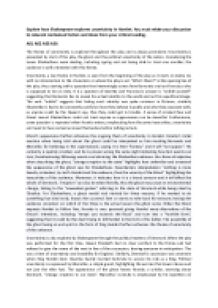 Ã¯Â»Â¿Explore how Shakespeare explores uncertainty in Hamlet. You must relate your discussion to relevant contextual factors and ideas from your critical reading. A01 A02 A03 A05 The theme of uncertainty is explored throughout the play and is always prominent. Uncertainty is presented by start of the play, the ghost and the political uncertainty of the nation. Considering the issues Elizabethans were dealing, including spying and not being able to trust one another, the audience is well orientated with this theme. Uncertainty, a key theme in Hamlet, is seen from the beginning of the play as it starts in-media res with no introduction to the characters or where the play is set. â€œWhoâ€™s there?â€ is the opening line of the play, thus starting with a question that interestingly comes from Barnardo and not Francisco who is supposed to be on duty. It is a question of identity and Franciscoâ€™s answer is â€œunfold yourselfâ€ suggesting that Barnardo has to reveal his actual identity to the world and not his superficial image. ...read more.

His choice of adjective when describing the ghost, â€œstrange eruption to the stateâ€ highlights how unfamiliar and unnatural the appearance of the ghost was for Elizabethans. Haverkampâ€™s interpretation â€œnothing is more heavily contested, by both Hamlet and the audience, than the veracity of the Ghostâ€ highlighting the insecurities of the audience. Moreover, it indicates how it is a broad concern and it will affect the whole of Denmark, â€œeruptionâ€ can also be taken literally, thus the ghost may cause an environmental change, linking to the â€œunweeded gardenâ€ referring to the state of Denmark while being ruled by Claudius. For Elizabethans, a ghost would visit mortals for three reasons; if he wanted to do something but died early, knows the countryâ€™s fate or wants to take back his treasure, leaving the audience uncertain on which of the three is the actual reason the ghost came. When the Ghost requests Hamlet to follow him, Horatio is very paranoid giving Hamlet many alternatives of the Ghostâ€™s intentions, including â€œtempt you ...read more.

Marcellusâ€™ curiosity is emphasised by his repetition of, â€œwhyâ€ and the consequent questions about the state of Denmark and the reason why there have been changes going on. The uncertainty of the population around the stateâ€™s fate contradicts with Knightâ€™s interpretation of Claudius as â€œa good and gentle Kingâ€ which is evidently incorrect given the insecurity he provides. Furthermore, even Horatio is not aware and sure of an answer to give Marcellous saying that â€œthe whisper goes soâ€, highlighting how the closest friend of the Prince is ignorant of political matters too. The fact that â€œwhispersâ€ have been going around about a potential invasion of Denmark from Norway shows how alarmed the natives, in a constant fear of war while the King â€œkeeps wassailâ€, weakening the nation appearance to their rivals. Similarly, Elizabethans (macrocosm) had a constant fear of a potential war with Spain and as Elizabeth was getting older and weaker the nation was also getting weaker as the health of the Kingdom depended on the health of the monarch. ...read more.