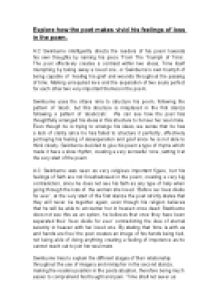 Explore how Swinburne makes vivid his feelings of loss in the poem From The Triumph of Time.

﻿Explore how the poet makes vivid his feelings of loss in the poem. A.C Swinburne intelligently directs the readers of his poem towards his own thoughts by naming his piece ?From The Triumph of Time?. The poet effectively creates a contrast within two ideas; Time itself triumphing by taking away a loved one, or Swinburne?s own triumph of being capable of healing his grief and wounds throughout the passing of time. Making unrequited love and the separation of two souls perfect for each other two very important themes in the poem. Swinburne uses the ottava rima to structure his poem, following the pattern of ?abab?, but this structure is misplaced in the first stanza following a pattern of ?ababccab?. ...read more.

Swinburne decided to give his poem a type of rhyme which made it have a slow rhythm, creating a very sorrowful tone, setting it at the very start of the poem. A.C Swinburne was seen as very religious important figure, but his feelings of faith are not foreshadowed in the poem, creating a very big contradiction, since he does not see his faith as any type of help when going through the loss of the woman she loved. ?Before our lives divide for ever?, at the very start of the first stanza the poet strictly states that they will never be together again, even though his religion believes that he will be able to encounter her in heaven once dead: ...read more.

Swinburne tries to explain the different stages of their relationship throughout the use of imagery and metaphor in the second stanza, making the readers position in the poets situation, therefore being much easier to comprehend his thought and pain. ?Time shall not sever us wholly in twain?, portraying time as a brutal weapon, the poet sees time as being a ?shower? that will not be able to abolish their eternal love. But we can also perceive the metaphor of their relationship portrayed as a ?harvest?, and how their problems have been piling up, and not even a dreadful ?shower? can be able to wash the bad experiences away, meaning that even though the outside of their love has been cleansed by the rain, it is still tarnished in the inside, but only them two know. ...read more.