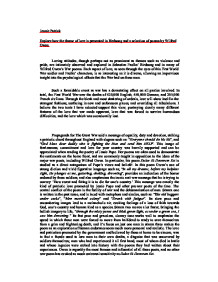 Explore how the theme of love is presented in Birdsong and a selection of poems by Wilfred Owen.

Jennie Patrick Explore how the theme of love is presented in Birdsong and a selection of poems by Wilfred Owen. Loving attitudes, though perhaps not as prominent as themes such as violence and pride, are intimately observed and explored in Sebastian Faulks' Birdsong and in many of Wilfred Owen's War poems. Each aspect of love, as seen through the eyes of this First World War soldier and Faulks' characters, is as interesting as it is diverse, allowing an impervious insight into the psychological effects that the War had on these men. Such a formidable event as war has a devastating effect on all parties involved. In total, the First World War saw the deaths of 420,000 English, 450,000 German, and 205,000 French civilians. Through the bleak and most shattering of ordeals, love will show itself in the strangest fashions; surfacing in new and unforeseen places, and overriding all tribulations. I believe the two texts I have selected support this view, portraying clearly many different features of the love that war made apparent, love that was forced to survive horrendous difficulties, and the love which was occasionally lost. Propaganda for The Great War sold a message of equality, duty and devotion, striking a patriotic chord throughout England with slogans such as: "Everyone should do his bit", and "God bless dear daddy who is fighting the Hun and send him HELP". ...read more.

I feel that the love these men had for their fellow soldiers was a perfectly natural and beautiful love, the tragedy being that most of these loving friendships were lost through the death and destruction of the war. At one level, Owen's poem Futility is a simple concept; yet another soldier has died in battle, and the warmth of the sun cannot wake him despite the fact that it created life to begin with. The hypothetical question to round up the poem is therefore inevitable: "O what made fatuous sunbeams toil To break Earth's sleep at all?" Was it really worth creating life if all we do is destroy it? On another level, the double meanings and perpetual question within this poem leads the reader to ponder the meaning of life, and is consequently the basis for many philosophical questions. It makes you think harder about the futility of war, and raises a number of doubts concerning the power of the sun as a life-giving being. It also explores the ironic love of nature that the soldiers found themselves possessing. They are trapped in a circle of destruction; loving the beauty of nature, but being forced to demolish everything in their path. The personification of the sun, "The kind old sun", aids to highlight this eternal beauty and give the poem a maternal air. The surrounding environment for Stephen in Birdsong is described as being "picturesque", and the "little islands of damp fertility divided by the channels of the split river" is the setting for the colossal war that is to take place later in the book. ...read more.

The fiery passion between Stephen and Isabelle in pages 58-61 reflects the horrors that have yet to come; "Her face and neck were suffused with a pink glow where the blood was diluted by the colour of the milky young skin", "He looked at her fiercely", and represents the zealous aspect of love which is significantly recorded in the book. Love is composed of many intense elements, and remains the subject of much confusion after thousands of years of deliberation. Such concentrated emotions as experienced during the war are bound to elicit a love at a measure never before witnessed, and these two forms of writing prove this. Love is shown in these texts through comradeship, pride, dependence and patriotism. Love is therefore presented as both a struggle and a blessing in these two styles of writing, Owen using mostly images of Hell and nature to invoke tender feelings, such as the personification of "The kind old sun" in Futility and "the haunting flares" in Dulce Et Decorum Est; Faulkes using emotive language and character relationships to portray the sadness and the loss encountered during the war. Both are successful in their attempt to show love enduring everything, and of love being borne from human nature's lust for survival. Footnotes �Owen's poem Dulce Et Decorum Est was originally dedicated to Jessie Pope, but under the advice of Sassoon, Owen settled for using "My friend" to represent her, believing that a name check was perhaps too strong. ...read more.

This is a very good essay and a very valiant attempt to answer a question that could lend itself to a dissertation.
The writer shows an understanding of both novel and poems and there is evidence of thorough research and wider reading. Good inclusion of social and historical contextual factors. Accurate use of terminology and well selected quotes to support arguments.