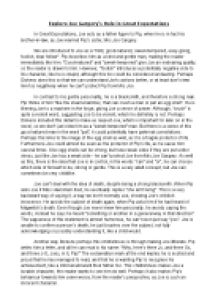 ﻿Explore Joe Gargery?s Role in Great Expectations In Great Expectations, Joe acts as a father figure to Pip, when he is in fact his brother-in-law, as Joe married Pip?s sister, Mrs Joe Gargery. We are introduced to Joe as a ?mild, good-natured, sweet-tempered, easy-going, foolish, dear fellow?. Pip describes him as a kind and gentle man, making the reader immediately like him. ?Good-natured? and ?sweet-tempered? give Joe an endearing quality, so the reader is drawn to him. However, ?foolish? introduces a potentially negative side to his character, like he is stupid, although this too could be considered endearing. Perhaps Dickens does this so that we can understand Joe?s actions better, or at least don?t view him too negatively when he can?t protect Pip from Mrs Joe. In contrast to his gentle personality, he is a blacksmith, and therefore a strong man. Pip thinks of him ?like the steam-hammer, that can crush a man or pat an egg shell?. He is likening Joe to a machine in the forge, giving Joe a sense of power. Although, ?crush? is quite a violent word, suggesting Joe to be violent, which he definitely is not. Perhaps Dickens included this detail to make us respect Joe, which is important for later on in the novel, so we don?t just view him as a ?sweet-tempered? man. But there is a sense of this good natured man in the word ?pat?, it could potentially have paternal connotations. ...read more.

This could show Joe?s insecurity, that when he is no longer sure if Pip needs him, he becomes very polite, and address Pip as if he is in a higher class again. However, Joe does treat everyone equally, for example when Magwitch confesses about stealing the pie, Joe says that whatever he has done, ?we wouldn?t have you starved to death for it, poor miserable fellow-creature.? This shows how Joe views the world, and the people on it, that we are all of the same kind, and all have the same rights. As well as this, ?creature? implies that Joe believes humans are animals, perhaps why he struggles with classes and formalities. This may relate to the fact that Joe never shows a real desire to learn to read or write, because he thinks we are animals that just do physical things, such as make things, like a blacksmith does. ?Poor? also implies that Joe sympathises with the convict, despite knowing it was his own fault that he is in the position he is in, showing that Joe is very forgiving, which the reader respects him for. Joe shows this forgiveness on a number of occasions, for example, when he tells Pip about his abusive father, and how he came after him and his mother. He tells Pip it was because his ?father were that good in his hart that he couldn?t abear to be without us.? One could argue that this was Joe?s innocent view on the world, and that he couldn?t accept that someone would deliberately want to hurt someone else. ...read more.

Perhaps he is compensating for Mrs Joe?s lack of femininity, or he is filling in the gap left by her death, showing Joe to be a father figure for Pip. Ultimately, Joe is the only true father to Pip, he gives him ?the wealth of his great nature?, which is more than Magwitch ever did. He may not have a lot of money, but he is a true gentleman in character. Ironically, the poorest of all the men is the most gentlemanly. Moreover, Pip eventually comes to realise this: ?there was a simple dignity in him.? Now, whilst he is recognising Joe?s dignity, he doesn?t sound very respectful. The tone sounds quite patronising, and ?simple? implies stupidity. Overall, Joe is the only constant in the book, he can?t act, he can?t pretend to be something he is not, he doesn?t change for anyone - ?whoever came about me, still settled down into Joe.? Even the use of the word ?settled? gives the idea of stability and constants, Joe is always there for Pip. He acts as a role model for Pip, and the other characters, even if they don?t realise it. But he does have his negative qualities, he is childish and awkward. However, this gives him more power in the book, as the reader can relate to him, and not just view him as a religious saint-like figure. ...read more.