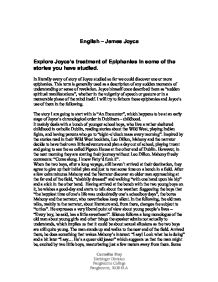 Explore Joyce&amp;#146;s treatment of Epiphanies in some of the stories you have studied.

English - James Joyce Explore Joyce's treatment of Epiphanies in some of the stories you have studied. In literally every of story of Joyce studied so far we could discover one or more epiphanies. This term is generally used as a description of any sudden moments of understanding or sense of revelation. Joyce himself once described them as "sudden spiritual manifestations", whether in the vulgarity of speech or gesture or in a memorable phase of the mind itself. I will try to fathom these epiphanies and Joyce's use of them in the following. The story I am going to start with is "An Encounter", which happens to be at an early stage of Joyce's chronological order in Dubliners - childhood. It mainly deals with a bunch of younger school boys, who live a rather sheltered childhood in catholic Dublin, reading stories about the Wild West, playing Indian fights, and having parents who go to "eight-o'clock mass every morning". Inspired by the stories read in their Wild West booklets, Leo Dillon, Mahony and the narrator decide to have their own little adventure and plan a day out of school, playing truant and going to see the so called Pigeon House at the other end of Dublin. However, in the next morning they are starting their journey without Leo Dillon. Mahony freely comments: "Come along. I knew Fatty'd funk it". ...read more.

No matter if the boys actually know what he is doing, it is definitely a so called "sudden spiritual manifestation": they know that what the man is doing there is strange for them, and it abruptly changes the way they look at him. Although there is no physical threat for them at that moment, Mahony and the speaker feel worried and confused, and one of them even runs away after having seen this. Although directly related to the old man's behaviour linked to the first epiphany, we can find another one when he is back and talking again: the way he speaks and his opinions have changed so drastically that there must be another strange awakening in the speakers mind. We feel reminded of a definition of an epiphany mentioned earlier: It is a "sudden spiritual manifestation in the vulgarity of speech and gesture". The third and last epiphany, I suggest, might be found at the very end of the story, when the boys are just about to leave, to finish their "day off" and start the journey back home: they now realize that they have really find out what their adventure was like: they have met a sexually sick bloke instead of having an exciting day in Dublin, visiting a sight and enjoying themselves. A second example for Joyce's treatment of epiphanies could be the short story "After the Race". ...read more.

This shows Doyle that the last twelve hours were just an illusion and that he can't actually cope with the standard of these international "jet-setters". He has lost far more money than he can afford and has to realize that he is just a Dubliner - and that Dublin hasn't got its place in a line-up of the international capitals. Joyce's use of the epiphany is remarkable, as it wasn't to the very end of the story that he effectively used it. For the whole time, Joyce left Jimmy Doyle and us in the imagination that the Dubliner could actually cope with his colleagues until he abruptly drops him out of his dream world. So far we could discover quite a different use of epiphanies in two of Joyce's stories: used three times in "An Encounter", opening different point of views for the boys of the day and of the old man, Joyce uses, in contrast, only one epiphany in "After the Race", which in itself, however, is much sharper and more abrupt. While in "After the race" the epiphany is used at the very end only, they are spread wider in "An Encounter". Both stories' epiphanies have in common that they actually always are memorable phases of the persons minds themselves, or in Joyce's words, these "sudden spiritual manifestations" I mentioned before. 1,490 words ?? ?? ?? ?? Cornelius Frey Harbinger Division Pangbourne College Pangbourne, RG8 8LA ...read more.