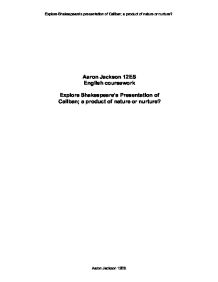 Explore Shakespeare&amp;#146;s Presentation of Caliban; a product of nature or nurture?

Aaron Jackson 12ES English coursework Explore Shakespeare's Presentation of Caliban; a product of nature or nurture? In Shakespeare's "The Tempest " the character of Caliban is portrayed in a puzzling and thought-provoking manner. He is a complex character as at times he displays savage like qualities and at others he displays an appreciation for nature and expresses his love for his habitat using poetic devices. Through Caliban Shakespeare explores the themes of nature and nurture. The question raised is, whether Caliban is the product of inheritance and is innately savage or whether his characteristics are a result of his social environment and the cruelty channelled towards him by the islands newer inhabitants. Within this essay I will be exploring the two opinions, the first one being that Caliban was born bad because of his parents also being bad, and the second being whether he appears bad because he does not fit into the mould of a civilised being which was created by his islands new arrivals. The name Caliban is an anagram of "cannibal" which was often spelt with one "n" in William Shakespeare's day, or it may derive from "Cariban" since Shakespeare would have been familiar with stories regarding savage "Carib Indians". Either way the name's origin would immediately provide the audience of the time with the expectation of baseness. Caliban was born as the son of "the foul witch Sycorax". The first description of Caliban shows him as animalistic and misshapen: "save for the son that she did litter here, a freckled whelp, hag-born- not honoured with a human shape". Every character in the play calls him by derogatory names. He is called a "tortoise", "monster", "filth", "poisonous snake". ...read more.

It is set on an "isle" apart from normal society and all the action takes place within four hours. It examines the contrast between supposed uncivilised and civilised beings and the results of colonialism. In spite of all the disorder portrayed it ends on a note of triumph. The older generation have found reconciliation and the younger have found love. Even Caliban is seeking " grace." The title, "The Tempest" could refer to the physical storm that occurs in the play and which cuts the characters and action off from the normal world. However it could also refer to the turbulent passions of the characters. In particular Caliban undergoes an amazing storm of emotions throughout the play from the poetic love of his island to hatred at enslavement to acceptance and peacefulness at the end. The form and structure of the play allows Shakespeare to concentrate on exploring the above themes. Caliban is a representation of the conflict between nature and nurture between the power of civilisation and instinct. Shakespeare vividly portrays through Caliban and the other characters interactions with him the conflict that was going on in Elizabethan society regarding colonisation. He can be seen as a representation of the noble savage. Wordsworth and Colderidge wrote about similar themes in their poetry. Coleridge wrote that " Caliban is wonderfully conceived: he is a sort of creature of the earth- Caliban is a noble being : a man in the sense of the imagination". Despite having had to learn a new language from Miraanda and Prospero , Caliban's poetic speeches are equal to theirs. ...read more.

Therefore whether baseness is inherited or develops is not really the issue at hand. Perhaps Shakespeare wishes us to recognise a little of Caliban in our selves, not completely corrupt, showing some fine qualities but being very human in responding to both good and bad in his environment. In conclusion Caliban is a thought provoking character who depicts the nature of humanity being influenced by both nature and nurture. Finally I would say that throughout the play the character of Caliban gives us confusing signals to his nature. At times such as when he is extremely impressionable around Stephano and Trinculo he shows himself to be a product of nurture but at other times such as when he attempts to rape Miranda he proves that his base instincts will conquer all others. I would conclude that it is open to interpretation whether he is a product of nature or nurture as he displays qualities which link to both theories, I also think an audiences opinion of Caliban's nature depends on the way in which the director of the play chooses to present him. The character provokes an extremely varied set of reactions. I feel that modern audiences would react differently from the Shakespeare's contemporaries to the character of Caliban, Post colonisation and post holocaust audiences would be well aware of the dangers of prejudice. It is now impossible not to sympathise with the enslaved Caliban although Shakespeare's audiences would not perhaps have shared this sympathy. It is a tribute to Shakespeare's greatness as a dramatist that the play allowed the Elizabethan audiences to consider such an important theme, which is still relevant in today's world. ?? ?? ?? ?? Explore Shakespeare's presentation of Caliban; a product of nature or nurture? Aaron Jackson 12ES ...read more.