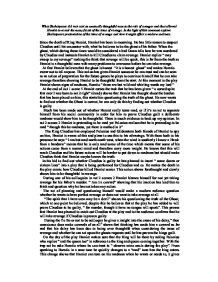 Explore Shakespeare presentation of the issue of revenge and how it might affect a modern audience.

What Shakespeare did was cast an unusually thoughtful man in the role of avenger and thus allowed Hamlet to reveal the many facets of the issue of revenge. In the light of this comment explore Shakespeare presentation of the issue of revenge and how it might affect a modern audience. Since the death of King Hamlet, Hamlet has been in mourning. He has little reason to suspect Claudius until his encounter with, what he believes to be the ghost of his father. When the ghost, which during these times would be considered a bad Oman tells how he was murdered by Claudius and instructs Hamlet to kill Claudius to claim revenge. Hamlet replies " may sweep to my revenge" making the think that revenge will be quick, this is far from the truth as Hamlet is a thoughtful man with many problems to overcome before he can take revenge. At first Hamlet believes that the ghost is honest "it is a honest ghost" and makes Horatio swear not to tell anyone. This action has given Hamlet someone he can trust and can be seen as an action of preparation for the future games he plays to convince himself that he can take revenge therefore showing Hamlet to be thoughtful from the start. At this moment in the play Hamlet shows signs of madness, Horatio " these are but wild and whirling words my lord " At the end of Act 1 scene 5 Hamlet curses the task that he has been given " o cursed spite that ever I was born to set it ...read more.

From speaking to Horatio in a sane tone he quickly changes to a "mad" tone hen the king enters. This change shows that Hamlet can turn on his madness when he wants or needs to, it gives him control over the other characters in the play by making them and the audience confused, this planned madness shows him to be thoughtful in revenge as it allow him to go around his task without raising to many issues as people put it own to his madness. Hamlet knows that the actors I the play "cannot keep counsel" and waits for the play to start. When the King ups and leaves during the play Hamlet is delighted and asks what Horatio what he observed during the poisoning Horatio replies " I did very well note him" The kings guilty actions has led them both to believe that the ghost is truthful which is the information Hamlet needed to act out the revenge. It also shows how Hamlets planning and thoughtfulness has worked out and given him more power. To the audience it shows that Hamlet has planned his actions towards proving the guilt of the king and makes them want to know what his next actions will be. In act 3 scene 3 Hamlet tries to convince himself that he can now take revenge " now could I drink hot blood" showing even now he is still thinking. This would make the audience confused as to whether he wants to take revenge or not. ...read more.

This therefore shows thought about his choice to be " mad " or not in different situations depending whether it would help him or not. This switching between " Mad " and not would lead the audience to question his madness and would lead them wonder whether he is possessed by a sprit or is sane. When the final act of revenge takes place it is the king who intends to poison Hamlet yet he fails and Hamlets mother is the victim. This is the trigger for Hamlet and he takes revenge by making Claudius drink the poison. The death mimics Hamlet seniors making the audience question whether Hamlet is as bad as Claudius. The actions of revenge are quite spontaneous and with so many people around shows Hamlet believed it was the right time. Hamlet also dies and the only two characters alive at the end are Horatio and Fortinbras, both people Hamlet trusted or admired. Through the play there are many examples of Hamlets thoughtfulness or planning. I believe that Hamlets madness is part of this as he wouldn't have been able to take revenge without it. In the play Shakespeare explores what thinking about revenge reveals about human nature mainly justifying our actions before we act them out. By him making Hamlet thoughtful in revenge allows us to see the different facets of revenge from reasoning to guilt and the way the burden effected Hamlets train of thought. Overall I believe Hamlet was thoughtful in revenge as by doing this Shakespeare was able to show us revenge in all its different lights. ...read more.