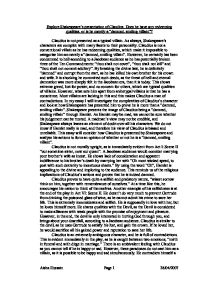 Explore Shakespeare's presentation of Claudius. Does he have any redeeming qualities, or is he merely a &quot;damned, smiling villain&quot;?

Explore Shakespeare's presentation of Claudius. Does he have any redeeming qualities, or is he merely a "damned, smiling villain"? Claudius is not presented as a typical villain. As always, Shakespeare's characters are complex with many facets to their personality. Claudius is not a conventional villain as he has redeeming qualities, which make it impossible to categorise him as merely a "damned, smiling villain". However, he certainly has been condemned to h**l according to a Jacobean audience as he has potentially broken three of the Ten Commandments: "thou shalt not covet", "thou shalt not kill" and "thou shalt not commit adultery". By breaking the divine law, he is definitely "damned" and corrupt from the start, as he has killed his own brother for his crown and wife. It is shocking he committed such deeds, as the threat of h**l and eternal damnation was more sharply felt in the Jacobean era, than it is today. This shows extreme greed, l**t for power, and no concern for others, which are typical qualities of villains. However, what sets him apart from archetypal villains is that he has a conscience. Most villains are lacking in this and this makes Claudius a man of contradictions. In my essay I will investigate the complexities of Claudius's character and look at how Shakespeare has presented him to prove he is more than a "damned, smiling villain". Shakespeare presents the image of Claudius being a "damned, smiling villain" through Hamlet. ...read more.

This shows that he must have some qualities that make a good king, such as experience, leadership qualities, and his expertise must have shone out to the people. The King is patriotic, "lets drink to Denmark". As he is the state, he must be patriotic. There is a symbiosis between the King and Denmark: they are one, "our dear brother's death". With the use of the word "our", it shows how he regards himself as the state. He asserts himself as King and this makes him popular. He is a seasoned warrior and very experienced. He makes a good king practically, but not morally, "to gather so much as from occasion you may glean, whether aught to us unknown afflicts him thus." He is very fraudulent as he employs spies on his "son". He is a wise, shrewd politician as he averts war with Norway. He is level headed as he doesn't rush into battle straight away to prove his leadership qualities. This could, however, be interpreted as cowardice which is a villain's trait. He is an extremely good orator and a talented diplomat which enables him to deal with public relations effectively, "giving to you no further personal power to business with the king, more than the scope of these dilated articles allow." He deals with the threat of war extremely effectively as he does his injudicious marriage to Gertrude. However, his talents are lost on Hamlet, who is set against him, "no more like my father than I to Hercules." ...read more.

This is true cunning and adeptness. He manipulates Laertes and yet he is a talented diplomat. I feel that Claudius has virtuous and redeeming qualities as well as traits possessed by "damned, smiling" villains. I believe Claudius is more than that, as he has proved he is an able and capable ruler. However, he is unable to repent and that is his downfall. He is a talented diplomat, which he uses to his advantage to manipulate people. This is ironic as he was asked to be king due to his redeeming qualities, yet he uses he good qualities in unscrupulous ways. There are other facets to Claudius's character as he is very complex. He makes a good King practically, not morally as he was extremely efficient when the Fortinbras crisis arose, and talking down Laertes from his rage. This supports the view that Claudius is a potentially good King. It is too simplistic to view him as a "damned, smiling villain." We feel almost sympathetic towards him whilst he is repenting, as he is genuinely remorseful. However, he is too greedy to sacrifice anything, which will bring about his downfall. He is set apart from other villains as he has a conscience. He is not cold blooded and calculating which is usually the case. He betrays emotions and shows he's human. Some would agree that although he has redeeming qualities, he is essentially a bad person and cannot be trusted, although he is capable of ruling a country. I believe that there is more bad than good in him and the villain prevails in his split personality. Aisha Hussain Page 1 28/04/2007 ...read more.

There is a good understanding of the character of Claudius and the points on his inability to repent are good. The essay could have covered Claudius' treatment of Hamlet in more detail and how this can be related to his position as a villain.