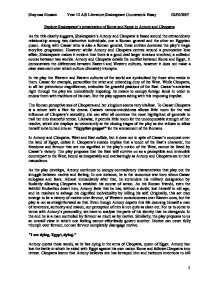 Explore Shakespeare's presentation of Rome and Egypt in Antony and Cleopatra

Explore Shakespeare's presentation of Rome and Egypt in Antony and Cleopatra As the title clearly suggests, Shakespeare's Antony and Cleopatra is based around the extraordinary relationship among two distinctive individuals, one a Roman general and the other an Egyptian queen. Along with Caesar who is also a Roman general, these entities dominate the play's tragic storyline progression. However whilst Antony and Cleopatra centres around a provocative love affair, Shakespeare makes it evident that there is a good deal larger tensions involved, a collision course between two worlds. Antony and Cleopatra details the conflict between Rome and Egypt, it demonstrates the differences between Eastern and Western cultures, however it does not make a clear statement over which culture ultimately triumphs. In the play the Western and Eastern cultures of the world are symbolised by those who reside in them. Caesar for example, personifies the strict and unbending duty of the West. While Cleopatra, in all her pretentious magnificence, embodies the graceful passions of the East. Caesar's anxieties right through the play are undoubtedly imposing: he means to occupy foreign lands in order to endow them with traditions of his own. But the play opposes siding with this imposing impulse. The Roman perceptiveness of Cleopatra and her kingdom seems very shallow. To Caesar Cleopatra is a w***e with a flair for drama. Caesars narrow-mindedness allows little room for the real influence of Cleopatra's sexuality, she can after all convince the most highlighted of generals to trail her into shameful retreat. ...read more.

Antony has lost the battle in which he sided with Egypt against his own nation Rome and follows Cleopatra into retreat. Cleopatra learns that Antony believes she has betrayed him and harbours intentions to kill her, she therefore sends false word to Antony that she, Cleopatra has taken her own life. Antony is in anguish and requests his comrade Eros to kill him. Eros decides to kill himself instead and Antony falls on to the end of his own sword. Antony is on the brink of death and so is brought to Cleopatra's memorial where he utters these words and takes his last breath of air in her arms. Antony's failure to depart this life right away by being stabbed by his own sword, in fine Roman manner, echo's the mark of the East upon him and up till now his magnificence of spirit is viewed plainly in this painful scene of his demise. He is at last able to unite the Roman and the Eastern divide of his character, by which he struggled right through the play. In his demise Antony goes back to his character as a true, grand, dignified Roman, becoming "A Roman by a Roman...... Valiantly vanquished" While Cleopatra is determined to "Bury him, and then what's brave, what's noble......... Let's do it after the high Roman fashion" Cleopatra's words propose that honour is a distinct Roman attribute, but Cleopatra's demise, which is her way of guaranteeing that she remains her truest self is clearly against Rome. ...read more.

The triple pillar of the world transform'd Into a strumpet's fool." This is one of the play's opening speeches. Philo tells his companions to view that Antony, one of three Rome's rulers, has been transformed into a "fool" who is following Cleopatra around blindly. He says that Antony one of the most feared man in all of Rome has been sidetracked by "A gipsy's l**t" Caesar concurs with Philo as he talks about Antony abandoning his "kingdom for a mirth" Romans, who think themselves to be superior to other due to their logic of thought and reason, as well as their dominating army, find Egypt to be alienating, where emotions control rational thinking, fervour rules and disrupts intelligence and most of all where its pleasure before business. Therefore Egypt is a threat to the Roman way of life, even Antony who is probably one of the most understanding person of the Egyptian culture realises this, he thinks the Egyptian culture will destroy his Roman identity. "These strong Egyptian fetters I must break... Or lose myself in dotage" To conclude this essay it can be said that Shakespeare presents Egypt more intricately than that of the Roman people's view on it, just as he does the same with Rome. Although Shakespeare uses characters to symbolize their own homelands respectively, the actual presentation of Rome and Egypt is much more intricate. Not only is Rome and Egypt presented through what the character's say, it is also expressed by the feelings and actions of those characters. Shaymas Hussain Year 12 A/S Literature Shakespeare Coursework Essay 02/05/2007 1 ...read more.