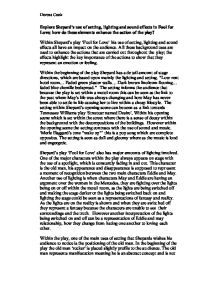 Explore Shepards use of setting, lighting and sound effects in Fool for Love; how do these elements enhance the action of the play?

Explore Shepard's use of setting, lighting and sound effects in Fool for Love; how do these elements enhance the action of the play? Within Shepard's play 'Fool for Love' his use of setting, lighting and sound effects all have an impact on the audience. All these background uses are used to enhance the actions that are carried out throughout the play; the effects highlight the key importance of the actions to show that they represent an emotion or feeling. Within the beginning of the play Shepard has a detail amount of stage directions, which are based upon mainly the lighting and setting. "Low rent hotel room... Faded green plaster walls... Dark brown linoleum flooring... faded blue chenille bedspread." The setting informs the audience that because the play is set within a motel room this can be seen as the link to the past where May's life was always changing and how May has never been able to settle in life causing her to live within a cheap lifestyle. ...read more.

This character is the old man, his appearance and disappearance is supposed to represent a moment of recognition between the two main characters Eddie and May. Another use of lighting is when characters May and Eddie are having an argument over the women in the Mercedes, they are fighting over the lights being on or off within the motel room, as the lights are being switched off and making the stage darker or the lights being switched back on and lighting the stage could be seen as a representations of fantasy and reality. As the lights are on the reality is shown and when they are switched off they represent a fantasy because the characters are unable to see their surroundings and the truth. However another interpretation of the lights being switched on and off can be a representation of Eddie and may relationship, how they change from hating one another to loving each other. ...read more.

Within the play one of Shepards main sound effects is the amplified door. When a character exits into the bathroom and slams the door behind them there is a microphone and a bass drum hidden in the frame so that each time the actor's slam the door the sound is increased dramatically. This then emphasises the entrances and exits of the actors and adds more tension towards the scene because of the loud, long noise. This emphasise on noise can also be seen as a representation towards the theme of abandonment. Further on into the play Eddie makes a dramatic exit and slams the door causing there to be a large boom which allows the audience to understand the exaggeration of the characters actions. To conclude, Shepards use of setting, sound effects and lighting all add tension, and contribution to highlight the major themes within the play to the audience. Dorcas Cook ...read more.