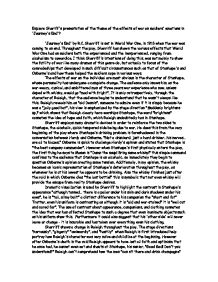 Explore Sheriff's presentation of the theme of the effects of war on soldiers' emotions in 'Journey's End'?

Explore Sheriff's presentation of the theme of the effects of war on soldiers' emotions in 'Journey's End'? 'Journey's End' by R.C. Sherriff is set in World War One, in 1918 when the war was coming to an end. Throughout the play, Sherriff has shown the various effects that World War One had on soldiers both the experienced and the inexperienced, ranging from alcoholism to cowardice. I think Sherriff's intentions of doing this, was not mainly to show the futility of war like many dramas of this genre do, but actually to focus of the comradeships that developed in such difficult circumstances such as that of Stanhope's and Osborne's and how these helped the soldiers cope in various ways. The effects of war on the individual are most obvious in the character of Stanhope, whose personality has undergone a complete change. The audience only knows him as the war-weary, cynical, and embittered man of three years war experience who now, unless doped with whisky, would go "mad with fright". ...read more.

there is a pallor under his skin and dark shadows under his eyes", he is "tall, slimy built" a distinct difference to his companion the "short and fat" Trotter, even his uniform is contrasting as although it is "old and war-stained" it is "well cut and cared for". The use of contrast about appearance, companions, and clothing connotes the idea that war has affected Stanhope to such a degree that even inanimate objects such as his uniform show this. Furthermore it could also suggest that his 'other side' will never leave or change - it is incurable and has taken over everything even his clothing. Sherriff shows a change in Raleigh throughout the play. The stage directions "nervously", "gingerly" "awkwardly", and "hastily" when Raleigh is first introduced help portray how Raleigh's character was very na�ve and childlike at the beginning. However after Osborne's death in the raid Raleigh appears to have lost all faith and optimism that he once had, he cannot even eat and shouts at Stanhope, his senior, "Good God! ...read more.

I think that Sherriff shows Hibbert in a negative light, which is why I don't think his main aim was to show the futility of war as if this was the case Hibbert would probably have received a much more sympathetic response. I think it is comradeships and loyalty that Sherriff was trying to portray, showing hoe Stanhope is noble as he doesn't just shoot Hibbert but gives him as chance to change his mind. I think Sherriff has taken this slant as the play would have been acted in 1928, so the audience would probably included soldiers who had fought in the war, the majority holding the view that fighting for your country is an obligation and any attempt to escape that is cowardice and should be punished. To conclude I think that throughout 'Journeys End' Sherriff has effectively used many dramatic devices such as stage directions to illustrate the effects of the war on the men involved very realistically. It paints a clear picture for the audience of what it was like in the trenches, and how the men were affected by war. ...read more.