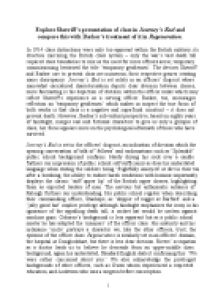 Explore Sherriffs presentation of class in Journeys End and compare this with Barkers treatment of it in Regeneration.

﻿Explore Sherriff?s presentation of class in Journey?s End and compare this with Barker?s treatment of it in Regeneration. In 1914 class distinctions were only too apparent within the British military, its structure mirroring the British class system ? only the war?s vast death toll required class boundaries to mix as the need for more officers arose; temporary commissioning bestowed the title ?temporary gentlemen?. The devices Sherriff and Barker use to present class are numerous, their respective genres creating some discrepancy. Journey?s End is set solely in an officers? dug-out where somewhat caricatured characterisation depicts clear division between classes; more fascinating is his depiction of division within the officer ranks which may reflect Sherriff?s experience as a serving officer. Barker, too, encourages reflection on ?temporary gentlemen? which makes us suspect the true focus of both works is that class is a negative and superficial construct ? it does not prevent death. However, Barker?s sub-textual perspective, based on eighty years of hindsight, merges real and fictional characters to give us only a glimpse of class; her focus appears more on the psychological aftermath of those who have survived. Journey's End is set in the officers? dug-out, an indication of division which the opening conversation of talk of ?fellows? and exclamations such as ?Splendid!? public school background confirms. ...read more.

but the use of humour in his dialogue matches that of Hardy and Trotter, making him an equal; in war there is no separation as each has his job. Prior indicates his social insecurity to Rivers: ?it helps if you have been to the right school? where hindsight informs us this is accurate. Barker uses Sarah to return Prior to his roots as she does not threaten his conflicting elevated status as an officer, hence his open mocking of the ignored censorship of letters as ?frightfully bad form?. Barker states he ?preferred Sarah like this? when she attacks his implied idea that only officers have ?honour,? and we recognise background as superficial. Sherriff uses Second Lieutenant Trotter to present the ?temporary gentlemen?, a non-commissioned officer who has ?risen? from the ranks. Thus he does not share the same social background as the other central characters as his weak Received Pronunciation makes apparent: ?I ?ate pineapple chunks; too bloomin? sickly for me!? Sherriff corroborates this difference even in the contrast of physical description. Whilst Stanhope is described as ?tall, slimly built with broad shoulders? Trotter is ?short and fat?. However, Trotter?s class status bears no reflection on his ability as an officer and we admire his equanimity in the face of a raid which forces the reader to question whether class is an effective system in the army. ...read more.

Yet the crucial message concerning class appears to be that it is superficially negative ? it does not prevent death. Sherriff implies, through the working class Mason and Trotter, an immunity to life?s hardships or with a well-developed coping mechanism of ?eating? and ?feeding? in sharp contrast to the higher-class Hibbert and Stanhope with their respective ?neurosis? and ?drinking?, both as a result of the pressures of the war. Barker also confirms the negativity of the class system through Prior?s anger at class division at the front but herpost-modernist psychological perspective uses class as a device for her character exploration rather than for comment on as a theme. Being a temporary gentleman also suggests that class is a construct rather than a given. Sherriff recognises that the war had to be fought as even the shell-shocked Hibbert doesn?t question its validity, merely highlights the toll war exacted on those involved, perhaps because his presentation was so close to actuality Barker?s concern for the quality of the survival that Sherriff?s characters are denied is perhaps a result of the weakened class structures of modern day Britain. It would seem that class for both writers is an entity that loses relevance when faced with the truth about this war. ...read more.