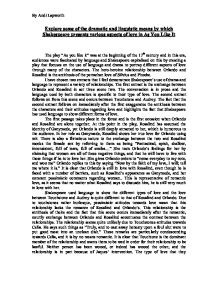 Explore some of the dramatic and linguistic means by which Shakespeare presents various aspects of love in As You Like It The play "As you like it" was at the beginning of the 17th century and in this era, audiences were fascinated by language and Shakespeare capitalised on this by creating a play that focuses on the use of language and drama to portray different aspects of love through many of the characters. The hero-heroine relationship between Orlando and Rosalind is the antithesis of the petrachan love of Silvius and Phoebe. I have chosen two extracts that I feel demonstrate Shakespeare's use of drama and language to represent a variety of relationships. The first extract is the exchange between Orlando and Rosalind in act three scene two. The conversation is in prose and the language used by both characters is specific to their type of love. ...read more.

She tests Orlando's feelings for her by claiming that women are all of these negative things, and that he will have to live with these things if he is to love her. She gives Orlando orders to "come everyday to my cote, and woo me" Orlando replies to this by saying "Now by the faith of my love, I will; tell me where it is." It is clear that Orlando is still in love with Rosalind, even though he is faced with a number of barriers, such as Rosalind's appearance as Ganymede, and her constant pessimistic comments regarding women.. This is representative of romantic love, as it seems that no matter what Rosalind says to dissuade him, he is still very much in love with her. Shakespeare used language to show the different types of love and the love between Touchstone and Audrey is quite different to that of Rosalind and Orlando. ...read more.

Neither person has been wooed, or indeed has wooed the other, and the relationship is in part because of Jaques' intervention. The type of love that they experience is a variation from the idealized forms of love present in the play. Orlando and Rosalind experience a hero/heroine type of romantic love, and Silvius and Phebe are pastoral lovers, existing in a fantasy world. Shakespeare uses the language and drama to create different forms of love. The witting dialogue employed by Rosalind adds extra impetus to the relationship and even though she teases him a great deal, it is still clear to the audience that she is very much in love with Orlando. The relationship between Touchtone and Phebe is the antithesis of Orlando and Rosalind's. There is little romance and therefore the audience is not aware whether Touchstone in particular is truly ambitious regarding the relationship. His consistent mockery of love and it's method mean that the audiences questions his integrity. By Andi Lapworth ...read more.