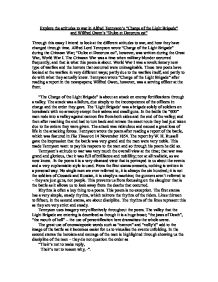 Explore the attitudes to war in Alfred Tennyson's &quot;Charge of the Light Brigade&quot; and Wilfred Owen's &quot;Dulce et Decorum est&quot;

Explore the attitudes to war in Alfred Tennyson's "Charge of the Light Brigade" and Wilfred Owen's "Dulce et Decorum est" Through this essay I intend to look at the different attitudes to war, and how they have changed through time. Alfred Lord Tennyson wrote "Charge of the Light Brigade" during the Crimean War; "Dulce et Decorum est", however, was written during the Great War, World War I. The Crimean War was a time when military blunder occurred frequently, and that is what this poem is about. World War I was a revolutionary new type of warfare and the horrors that occurred were unimaginable. These two poets have looked at the warfare in very different ways; partly due to the warfare itself, and partly to do with what they actually knew. Tennyson wrote "Charge of the Light Brigade" after reading a report in the newspapers; Wilfred Owen, however, was a serving officer at the front. "The Charge of the Light Brigade" is about an attack on enemy fortifications through a valley. The attack was a failure, due simply to the incompetence of the officers in charge and the order they gave. The 'Light Brigade' was a brigade solely of soldiers on horseback with no armoury except their sabres and small guns. In the battle the "600" men rode into a valley against cannon fire from both sides and the end of the valley; and then after reaching the end had to turn back and retrace the exact route they had just taken due to the orders they were given. The attack was ridiculous and caused a great loss of life in the attacking forces. Tennyson wrote the poem after reading a report of the battle, which was featured in The Times on 14 November 1854. The report by W. H. Russell gave the impression that the battle was very grand and the men were very noble. ...read more.

"Dulce et Decorum est" was written by Wilfred Owen during the first world war. Wilfred Owen was a serving officer at the front. He had said he wanted to speak on behalf of the men at the front, and through his poems such as this he did so. The poem is about a gas attack, which caught a group of soldiers retreating from the front for rest. It is written in the first person, which brings us closer to the events and also gives a more personal view to everything. Owen wrote the poem to show the reality of war. He doesn't at any point say that we shouldn't fight; he wasn't a pacifist, he fought as an officer at the front. However, he did want the truth to be told about the war. Through the poem he was directly opposing those in charge and authority who were telling the lies about the war to the people back home. He didn't want dishonesty, he wanted the truth to be told, and so he told the truth in his work, as we can see here. The imagery used by Owen is very different to that used by Tennyson. The images are not at all positive, unlike those of Tennyson. The opening stanza informs us of the condition of the men. The image those in authority gave about war was that it was glamorous; this is the complete opposite to what we are told by Owen. The image we gain of the men is not at all of strong and proud soldiers, but of "old beggars", who literally don't have the energy to move along. The soldiers were young, eager men when they entered the war, but it is suggested to us that through the war they have become old and seemingly not at all proud. The sharp, hard description of the men tells us exactly how the men are feeling; how they are said to be "coughing like hags". ...read more.

Then, the way he closes the poem by stating clearly that the saying is nothing but a lie, shows clearly the anger and outrage he feels towards those in charge. In Owen's opinion war is not indeed sweet and proper; it is horrific. He doesn't at all seem to be contradicting the fact that it is not good fight for country; after all he later lost his life fighting the war when attacking a German machine-gun post just before the armistice. The use of vivid imagery, leaving out none of the details, has created a poem that brings us, the reader, the truth behind the war and has shown, beyond doubt, Owens own view of the war and what happens to the men involved. Alfred Lord Tennyson seems to be completely for the war and has a very na�ve view. Really, it seems, he has no idea what the men actually went through. He is right to honour the men but the attack shouldn't have happened - it was badly planned and resulted in a great loss of life. I don't believe Tennyson was uncaring towards the men, but I don't believe he knew what did actually happen. Wilfred Owen saw the war from the front as an officer. Due to this he would undoubtedly have seen many men he knew, be killed in many ways; he would have seen what the war did to the serving men; and how the men wouldn't have had any idea of what to expect. Due to this he was angry, very angry, because of the lie "Dulce et Decorum est pro patria mori" which was used to encourage the men to enlist. Through the poem he was saying that there is nothing sweet about death, but in-fact says nothing against it being proper to die for your country. He wasn't against the war; he wasn't a pacifist; he just wanted the truth to be told. ...read more.