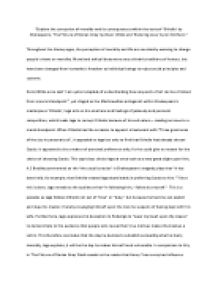 Explore the corruption of morality and its consequences within the texts of Othello, The Picture of Dorian Gray and Enduring Love

﻿?Explore the corruption of morality and its consequences within the texts of ?Othello? by Shakespeare, ?The Picture of Dorian Gray? by Oscar Wilde and ?Enduring Love? by Ian McEwan.? Throughout the literary ages, the perception of morality and life are constantly evolving to change people?s views on morality. Moral and ethical ideas were once chivalric traditions of honour, but have been changed from humanity?s freedom as individual beings to reject social principles and customs. Oscar Wilde once said ?I am quite incapable of understanding how any work of art can be criticised from a moral standpoint?1, yet staged as the Machiavellian antagonist within Shakespeare?s masterpiece ?Othello?, Iago acts on his emotions and feelings of jealously and personal competition, which leads Iago to corrupt Othello because of his evil nature ? leading an issue to a moral standpoint. When Othello had the occasion to appoint a lieutenant with ?Three great ones of the city in personal suit", it appealed to Iago but only to find that Othello had already chosen Cassio. It appeared to be a matter of personal preference only, for he could give no reason for the choice of choosing Cassio. This capricious choice lago at once took as a very great slight upon him, A.C Bradley commented on the ?the usual lunacies? in Shakespeare?s tragedy plays that "It has been held, for example, that Othello treated lago abominably in preferring Cassio to him."2 Once this is done, Iago reveals to the audience that ?In following him, I follow but myself.? This is a paradox as Iago follows Othello not out of ?love? or ?duty,? but because he feels he can exploit and dupe his master, thereby revenging himself upon the man he suspects of having slept with his wife. ...read more.

According to Genesis 3:15 the snake was cursed to crawl on the ground and therefore be susceptible to man?s heel crushing its head (this vulnerability is a direct result of Satan?s sin). This foreshadowing of what will really happen to Satan someday ? thus the religious allegory could be suggested that Emilia believes the man who corrupted Othello, should be crushed. Here, the audience notices Shakespeare?s deliberate use of dramatic irony that as far as Emelia is concerned the ?serpent? is her very own husband Iago. In addition, Shakespeare illustrates the power and the extreme manipulation he can create with his protagonists, once again reinforcing that portrayal of the Machiavellian character. In all three texts, delusion seems to be one of the prevalent effects on the individuals because of the corruption they have been exposed to. In ?Othello?, the audiences capture Othello?s obsessive impulse of his undying love for Desdemona as ?Perdition catch my soul\But I do love thee, and when I love thee not, \Chaos is come again?. This indicates that Desdemona?s image means the world to Othello and therefore; if he stops loving her, the entire universe stops making sense for him and the world is reduced to ?Chaos.? The effect of the corruption Iago has put on Othello is starting to progressively show and if he found out Desdemona?s ?hidden agenda?, he would be devastated and the love wouldn?t be there, therefore his world would be in ruins. Shakespeare personifies chaos to highlight the feeling of not having Desdemona anymore, which would be a cruel phenomenon that Othello could not merely tolerate. This reinforces the idea that Othello would rather be dead than alive if he did not have Desdemona, which for some could be seen as foreshadowing Othello?s decline from grace. ...read more.

In the same way, Dorian Gray?s morality fails him miserably as his mind has totally descended into madness as he ?dug the knife into the great vein? crushing the man?s head on the table, and stabbing again and again.? The structural repetition of ?again and again? graphically highlights the immoral behaviour Dorian has because of the influence Henry had over him about morality. This supports Wilde?s view that ?The promising youth [Dorian] plunges into ever kind of mean depravity?.3 As well as murder, suicide is an essential part of how the characters seem to escape from their madness. For instance in ?Othello?, Othello pictures himself as ?a turbaned Turk who ?Beat a Venetian and traduced the state?. Here is one of his own enemies, which he most certainly became in the end. According to Isaac Asimov ?Othello's use of the reverse phrase in his last agony is like a return to his origins".4 However, Othello dies speaking of himself in the third person, perhaps signifying his lost identity. Along with Iago, we "Look on the tragic loading of this bed". Equally important is in ?Enduring Love? when Jed ?slit his throat in front of us? which could suggest his suicide was influenced by his own delusions about religion whenever he blurted out his tainted perception of it to Joe, making Joe reject Jed?s words and Jed himself. Likewise in ?Dorian Gray? the definitive catastrophic moment is when ?a dead man? was ?lying on the floor? ?with a knife in his heart? the readers simultaneously ?recognized who it was?. According Wilde5 ?Dorian kills conscience, and at that moment kills himself.? It is seen here that for Dorian to be completely free of being ?withered, wrinkled, and loathsome of visage? he had to kill himself to save himself from more immoral acts. ...read more.