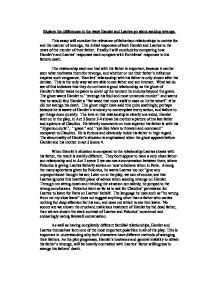 Explore the differences in the ways Hamlet and Laertes go about seeking revenge. This essay will consider the relevance of father/son relationships to motive for and the manner of revenge, the initial responses of both Hamlet and Laertes to the news of the murder of their father. Finally I will conclude by comparing how Hamlet's and Laertes' responses each compare with Fortinbras' responses to his fathers death. The relationship each son had with his father is important, because it can be seen what motivates them for revenge, and whether or not their father's influence inspires such vengeance. Hamlets' relationship with his father is only shown after his demise. This is the only way we are able to see father and son interact. What we do see of this indicates that they do not have a good relationship, as the ghost of Hamlet's father takes no pains to cover up the torment he endures beyond the grave. The ghost wants Hamlet to ''revenge his foul and most unnatural murder'' and warns that he would find Hamlet a ''fat weed that roots itself in ease on Lethe wharf'' if he did not avenge his death. The ghost might have said this quite scathingly, perhaps because he is aware of Hamlet's tendency to contemplate every action, and failure to get things done quickly. The love in this relationship is clearly one sided, Hamlet later on in the play, in Act 3 Scene 3-4 shows his mother a picture of his late father and a picture of Claudius. ...read more.

The words that Laertes utters could quite easily have come from Hamlet's mouth. You can almost hear the bitterness and scarcely contained fury in Laertes tone as he said these words. It is poignant that whereas Hamlet took time to establish Claudius' s guilt for himself, Laertes had jumped in at the deep-end and confronted the king wrongfully. Claudius managed to diffuse the situation by giving very short snappy answers such as ''dead'' by saying this; he is showing that he is being honest and up-front with Laertes and giving no excuses. In Act 4, Scent 7 Laertes initial fury has calmed down, although he remains extremely confident about the task ahead. He thinks about Hamlet's dirty deed and his ''noble father lost; he welcomes Hamlets' return so that he can ''tell him to his teeth 'though didest thou'''. Every word he says invites comparison with Hamlet. When he arrived at the palace to challenge the king, Laertes brought with him a ''riotous head'' who cried, ''Laertes shall be king!'' He is obviously very angry, and this can be seen in the manner in which he speaks to Claudius. He calls him a ''vile king'', "dares damnation", and ''vows to the blackest devil!'' He obviously wants to make very clear his feelings on the matter of his father's death and wants revenge. It can also be seen that he has dispelled any respect he had for Claudius. This is different from Hamlet, because although Hamlet is not overly polite to the king, he does not openly defy him as Laertes does in this scene. ...read more.

For Hamlet nothing is simple, everything raises questions. Yet, Laertes is like Fortinbras in two ways. He is reckless, has neither awe nor scruple, and is careless of the realm. This is evident when he stormed into the palace demanding vengeance on Claudius. If he had killed him, then he would have left Denmark without a king and at the risk of foreign usurpation. This, of course, happened when Fortinbras took advantage of the situation later on in the play. He is also similar because, both he and Fortinbras gather an army, which consisted of the ''rabble'' and of ''lawless resolutes''. In conclusion to this essay, it can be quite safely said that Hamlet and Laertes are different in many ways. Their relationships with their fathers; whilst Laertes' appears idyllic, Hamlet's is shown to be terribly damaged and probably irreparable. Laertes is neither to be consoled nor to be appeased until he reaches his aim of slaying Hamlet. His grief quickly converted to anger. Hamlet's grief rendered him dull and slothful. He does act impetuously when he is consumed with passion; however, he has been brutal with Ophelia, cruel with his mother and has killed Polonius under the strain of passion. Laertes too, acts under the duress of passion and not from reason. Even in his killing of Hamlet, he acted against his own conscience. He had promised revenge under the influence of violent anger, which was moved by grief to hate and by hate to revenge. In the end both wronged sons met their deaths because Hamlet is too magnanimous to ''peruse the foils'' and Laertes mean enough to take advantage of it. ...read more.