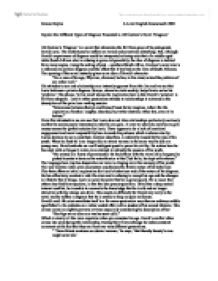 Explore the Different Types of Disgrace Presented in JM Coetzee's Novel 'Disgrace' JM Coetzee's 'Disgrace' is a novel that chronicles the fall from grace of its protagonist, David Lurie. The misfortunes he suffers are varied and sometimes disturbing. But, although David's experiences of disgrace could be interpreted as being only that of a middle aged white South African who is refusing to grow old gracefully, the idea of disgrace is tackled from many angles. Using the setting of post - apartheid South Africa, Coetzee's novel also is a reference to political disgrace and the effect that it has had on the lives of South Africans. The opening of the novel instantly gives us an idea of David's character "For a man of his age, fifty-two, divorced, he has, to his mind, solved the problem of sex rather well." His attitudes to sex and relationships are instantly apparent from this line and we see that Lurie harbours a private disgrace. Soraya, whom he visits weekly, helps him to solve his 'problem'. The phrase, 'to his mind' shows the implication here is that David's 'solution' is far from adequate. Lurie's rather passionless attitude to relationships is mirrored in the description of the pairs love-making session "Intercourse between Soraya and himself must be he imagines, rather like the copulation of snakes: lengthy, absorbed, but rather abstract, rather dry, even at its hottest." From this introduction we can see that Lurie does not take relationships particularly seriously and that he seems purely interested in what he can gain. A lover to whom he only has to give money seems the perfect solution for Lurie. ...read more.

The idea of damnation or a fall from grace is one that is repeated and is especially obvious in his class discussion of Lucifer and his banishment . "He stood a stranger in this breathing world, An erring spirit from another hurled; A thing of dark imaginings, that shaped By choice the perils he by chance escaped" This clearly seems to relate to his own life, his disgrace at the university and his having to live in the alien environment of his daughter's home which parallels the 'breathing world' to which Lucifer is exiled. Again, these ideas of an abuse of power and authority followed by a fall could be related to the South African political situation. On moving to the smallholding, the themes of disgrace become quite different. David is forced to seek refuge with his daughter. The situation here shows just how far he has fallen, as the role of parent and child are practically reversed. Lucy is now a fully grown woman with her own business, making her own way in life. She does not refer to him as 'dad' but calls him David, indicative of the way their relationship has changed and perhaps even broken down. A theme of disgrace that is apparent in this part of the novel is David's inadequacy as a father and his inability to communicate properly with his daughter. Coetzee initially creates some tension between them in the form of minor disagreements "...animal welfare people are a bit like Christians of a certain kind. Everyone is so cheerful and well- intentioned that after a while you itch to go off and do some raping and pillaging.... ...read more.

Upon returning he finds his house has been looted, leaving him with nothing. "He wanders through the house taking a census of his losses. His bedroom has been ransacked, the cupboards yawn bare." This acts as a symbol, just as his house has been ransacked with nothing left behind, he has now become a shell of his former self, the disgrace has taken almost everything from him. By the end of the novel David Lurie seems quite a ridiculous figure, destroyed by the disgrace, he now has nothing except his romantic dream to write an opera. Even this will never really come to fruition though as he attempts to compose it using a banjo. We can see then that the first part of the novel is more concerned with the types of disgrace that Lurie suffers and the reasons for them. The later part, after moving in with Lucy talks about the effect that disgrace can have on ones life relationships and personality 'Disgrace' is not a novel about political disgrace masquerading as one about a disgraced white South African , both aspects of the novel are important. Coetzee explores many types of disgrace, David's abuse of power, coming as a result of his inability to control his animal instincts; then his disgrace being revealed through the media to the rest of society. His dysfunctional family situation with two divorces and a daughter with whom he cannot communicate. The detail in which David's fall is explored cannot be passed off as a metaphor. The essence of the novel is the idea of a disgraced man in a disgraced society who, at the end of the novel, finds some strength in self-knowledge and some dignity in resigned acceptance. Rowan Boyles A-Level English Coursework 2002 ...read more.