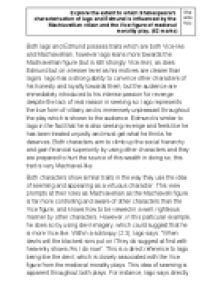 Explore the extent to which Shakespeare's characterisation of Iago and Edmund is influenced by the Machiavellian villain and the Vice figure of medieval morality play. (62 marks)

﻿Explore the extent to which Shakespeare's characterisation of Iago and Edmund is influenced by the Machiavellian villain and the Vice figure of medieval morality play. (62 marks) Shawda Aziz Both Iago and Edmund possess traits which are both Vice-like and Machiavellian, however Iago leans more towards the Machiavellian figure (but is still strongly Vice-like), as does Edmund but on a lesser level as his motives are clearer than Iago's. Iago has a strong ability to convince other characters of his honesty and loyalty towards them, but the audience are immediately introduced to his intense passion for revenge despite the lack of real reason in seeking so. Iago represents the true form of villainy and is immensely unpleasant throughout the play which is shown to the audience. Edmund is similar to Iago in the fact that he is also seeking revenge and feels like he has been treated unjustly and must get what he thinks he deserves. Both characters aim to climb up the social hierarchy and gain financial superiority by using other characters and they are prepared to hurt the source of this wealth in doing so; this trait is very Machiavel-like. ...read more.

In Iago's case, Shakespeare does not explicitly say what the motives of Iago are apart from hinting that he is unhappy with Othello for appointing Cassio as Lieutenant and believing that Othello slept with Emilia, his wife. However, these reasons alone do not appear to be the reason why he plots and plans against Othello, suggesting the Iago may actually be purely devilish and evil rather than have ambitions and aims as a Machiavellian figure would. Samuel Taylor Coleridge emphasises this with the famous phrase [2], implying that Iago does not have a motive for his actions but does so purely because he is evil. This contrasts with Edmund because his motives are clear throughout the play, disclosed to the audience in his first soliloquy when he says "Legitimate Edgar, I must have your land: / Our father's love is to the bastard Edmund". This may be almost as compensation of the discrimination he has faced all his life and one way of getting equal with society. Jacobean audiences would have been particularly alive to this as they would have very likely seen illegitimate children as a burden upon society and social outcasts. ...read more.

This makes him Machiavellian as he is willing to do anything to achieve his aims. One would assume that critics of Othello would also agree that Iago is a strong Machiavellian figure, however many assume the view that Iago is in fact a Vice-like figure, as described as a 'demi-devil' by A.C Bradley, and not intelligent or a genius at all. This is suggested by A.C Bradley when asked if he thinks Iago is a Machiavellian villain to which he disagrees and says that[5]. Word Count Page 1 457 Page 2 402 Page 3 444 Page 4 424 Page 5 269 Total: 1996 ________________ [1] "power and pleasure in seeing others suffer, especially those believed to be superior or even invulnerable" [2] "The motive-hunting of motiveless Malignity" [3] "Psychologically, Iago is a slighted man, powerfully possessed by hatred against a master who (as he thinks) has kept him down, and by envy for a man he despises who has been promoted over him" [4] "There is no sign that he is in theory an atheist or even an unbeliever in the received religion. On the contrary, he uses it in language" [5] Iago "cannot be taken to exemplify the popular Elizabethan idea of a disciple of Machiavelli." ...read more.