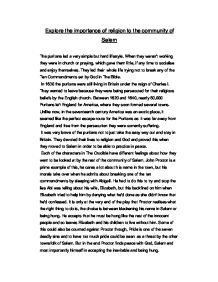 Explore the importance of religion to the community of Salem

Explore the importance of religion to the community of Salem The puritans led a very simple but hard lifestyle. When they weren't working they were in church or praying, which gave them little, if any time to socialise and enjoy themselves. They led their whole life trying not to break any of the Ten Commandments set by God in The Bible. In 1630 the puritans were still living in Britain under the reign of Charles I. They wanted to leave because they were being persecuted for their religious beliefs by the English church. Between 1620 and 1640, nearly 50,000 Puritans left England for America, where they soon formed several towns. Unlike now, in the seventeenth century America was an exotic place, it seemed like the perfect escape route for the Puritans as it was far away from England and free from the persecution they were currently suffering. It was very brave of the puritans not to just take the easy way out and stay in Britain. They devoted their lives to religion and God and proved this when they moved to Salem in order to be able to practice in peace. Each of the characters in The Crucible have different feelings about how they want to be looked at by the rest of the community of Salem. ...read more.

Hale, who has come to Salem only to try and solve the problems cause by Abigail and her friends, talks of the books he uses and the knowledge he has as "the very crowns of the holy law". "I have gone this three months like our lord into the wilderness", Hale shows here how, like Jesus, he's had a lot to cope with and a lot to think about. This is also a chance for him to show off his knowledge of the Bible and in some way prove that he is completely dedicated to his religion. Elizabeth Proctor also manages to turn the story of Moses and the Israelites into a current situation, she knows how Abigail influences the other girls' minds and "where she walks, the crowd will part like the sea of Israel". The first names of the characters in the play and others who are mentioned are taken from the Bible. This was usual in this time, giving someone a name, which will give them a kind of role model, or someone to look up to. If they acted like the people they were named after they would have a good life and be happy. Names such as Ezekiel, Isaac and Susannah are taken from the Old Testament and names like John, Martha and Elizabeth are lifted from the New Testament. ...read more.

when he spoke to him that he hadn't been to church "twenty six time in seventeen month", judging that each month there are at least four Sundays then this would mean that out of seventeen months John Proctor had missed nearly seven months worth of going to Church, not at all a good thing. Overall it has been shown that religion might seem like it is the integral part of Salem life but the people living there are really not following the commandments. This ends up costing many innocent people their lives and is very selfish. The idea of moving to Salem purely so they could practice their religion freely seems ironic when all they did when they got there was break the commandments, commit the deadly sins and go completely against the words of the bible. Although there are a small minority that are completely Christian and do the right thing throughout the play it is clearly shown that the majority of the townsfolk are selfish, and greedy. Unfortunately the people who were completely innocent and who stuck to all of the commandments were the ones who got picked upon as being a witch and therefore were killed. But if looking for someone from outside the community to blame then there would not be one, the only people that can be blamed are the villagers themselves and the people of the court. ...read more.