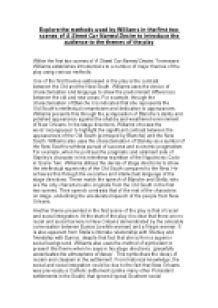 ﻿Explore the methods used by Williams in the first two scenes of A Street Car Named Desire to introduce the audience to the themes of the play Within the first two scenes of A Street Car Named Desire, Tennessee Williams establishes introductions to a number of major themes of the play using various methods. One of the first themes addressed in the play is the contrast between the Old and the New South. Williams uses the device of characterisation and language to show the predominant differences between the old and new areas. For example, through the characterisation of Blanche it is indicated that she represents the Old South?s intellectual romanticism and dedication to appearances. Williams presents this through the juxtaposition of Blanche?s dainty and polished appearance against the shabby and weathered environment of New Orleans. In his stage directions, Williams chooses the word ?incongruous? to highlight the significant contrast between the appearances of the Old South (portrayed by Blanche) and the New South. Williams also uses the characterisation of Stanley as a symbol of the New South?s ruthless pursuit of success and economic pragmatism. ...read more.

In the first two scenes Williams presents the two protagonists as polar opposites. For example, Stanley is blunt, vitriotic and accusing towards Blanche in his determination to discover the real reason for the loss of Belle Reve in Scene Two. By contrast, Blanche is dismissive and dances around the topic. In this Scene, Williams has laid down the groundwork for conflict between Stanley and Blanche to be inevitable. He does this by making Stanley hostile to Blanche because of a sharp awareness of their class differences. This causes antagonism between them, as Blanche?s affluence is a reminder to Stanley of where Stella has come from, his inferiority and how he cannot provide these rich luxuries for her. In Scene Two, the antagonism between them is intensified by Blanche?s provocative behaviour in her red robe, which seems more fitting for a prostitute than a schoolteacher. This consequently raises his suspicions that her account of what happened at Belle Reve is fabricated. Stanley?s escalating suspicion is portrayed when he exclaims; ?If I didn?t know that you were my wife?s sister I?d get ideas about you!? By using this juxtaposition of Stanley?s smouldering set against Blanche?s misguided playfulness, William?s brings to life the theme of conflict between these characters a visible theme. ...read more.

The idea that Blanche is mentally plagued with trouble and problems can be linked to another theme introduced in the first couple of scenes- the theme of bathing. Whilst Blanche insists that her obsession with bathing is for the purpose of ?calming her nerves?, William?s uses this action as symbolism for her efforts to cleanse herself of her odious history. In addition, the theme of poker is also addressed in the first two scenes. William introduces this theme using the metaphor of a woman having to ?lay her cards on the table? in Scene Two. Whilst this metaphor is used to imply that Blanche must be completely honest with Stanley, the phrase is also within the semantic field of poker and is linked to the declaration that there will be a men?s poker game later that evening. To conclude, Williams introduces a number of major themes within A Streetcar Named Desire in the first two scenes, such as The Old South vs. the New South, the conflict between Blanche and Stanley, racial and social integration, primitive vs. primal, Stella and Stanley?s relationship, male dominance, fragility, poker and bathing. To do this, Williams uses a number of methods, predominantly through characterisation, symbolism, stage directions, language and dialogue. ...read more.