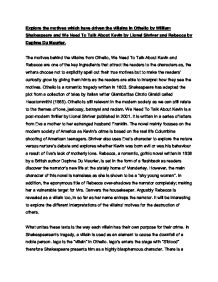 Explore the motives which have driven the villains in Othello by William Shakespeare and We Need To Talk About Kevin by Lionel Shriver and Rebecca by Daphne Du Maurier.

Explore the motives which have driven the villains in Othello by William Shakespeare and We Need To Talk About Kevin by Lionel Shriver and Rebecca by Daphne Du Maurier. The motives behind the villains from Othello, We Need To Talk About Kevin and Rebecca are one of the key ingredients that attract the readers to the characters as, the writers choose not to explicitly spell out their true motives but to make the readers' curiosity grow by giving them hints as the readers are able to interpret how they see the motives. Othello is a romantic tragedy written in 1603. Shakespeare has adapted the plot from a collection of tales by Italian writer Giambattisa Cinzio Giraldi called Hecatommithi (1565). Othello is still relevant in the modern society as we can still relate to the themes of love, jealousy, betrayal and r****m. We Need To Talk About Kevin is a post-modern thriller by Lionel Shriver published in 2001. It is written in a series of letters from Eva a mother to her estranged husband Franklin. The novel mainly focuses on the modern society of America as Kevin's crime is based on the real life Columbine shooting of American teenagers. Shriver also uses Eva's character to explore the nature versus nurture's debate and explores whether Kevin was born evil or was his behaviour a result of Eva's lack of motherly love. Rebecca, a romantic, gothic novel written in 1938 by a British author Daphne Du Maurier, is set in the form of a flashback as readers discover the narrator's new life at the stately home of Manderley. However, the main character of this novel is nameless as she is shown to be a "shy young woman". In addition, the eponymous title of Rebecca over-shadows the narrator completely; making her a vulnerable target for Mrs. Danvers the housekeeper. Arguably Rebecca is revealed as a villain too, in so far as her name entraps the narrator. ...read more.

Moreover, the narrator in Rebecca compares the imagery of Rebecca's handwriting to the motion of "a snake" as it "twisted" around to gives as sense of how conniving Rebecca was. By comparing Rebecca with a cold-hearted reptile, Du Maurier is suggesting that Rebecca is lacking a feminine quality as she also has womb cancer which prevents her from having a child; possibly as a form of punishment for her infidelity. From the point of view of a feminist reading, this is seen as a critique to Rebecca as she did not behave the way a wife and woman should seeing as she should be denial from culpability because traditional gender roles should not be reinforces in modern society. Mrs. Danvers decided on her plan upon finding out Rebecca's murder. A fundamental point of connection between all three texts is the writers' use of "snake" as a metaphor for the villain's behaviour. These suggest that in a way, all their motives are based on the loss of something or someone. As Iago loses the job he wanted, Kevin's family is falling apart and Mrs. Danvers loses Rebecca through the hand of Maxim. On the Elizabethan stage, a soliloquy was delivered directly to the audience. This convention was a fruitful and flexible tool for the dramatist as Shakespeare uses Iago's soliloquies to create dramatic irony as this is a great way for the audience psychologically engage with Iago. Iago confides to the audience about his plans and suspicions. His soliloquies demonstrate his recognition of others' virtues as he says that Cassio is a "proper man" despite the fact that he later contradicts with the statement fearing Cassio with his wife. This suggests that Iago is a paranoid and filled with s****l jealousy as he does not trust women. Iago's suspicious of having been cuckolded as he said "And it is thought abroad that 'twixt my sheets" Shakespeare uses of the conjunctive "and" suggests Iago does not hate Othello because he might have slept with Emilia but there are other reasons to this hatred. ...read more.

In a way, it could be argued that Eva is to be blamed for Kevin's malice as she pushes her child away when he needs her love most. This is supported by the style of the novel as the letters could be seen as a way for Eva to construct her thoughts and ask for forgiveness or to pinpoint the blame. Perhaps, Kevin's evil is from the feeling of knowing that there is nothing else he could achieve in his life since he has all the money and material goods. Kevin is spoilt as he believes that he could get away with his actions without punishment. Mrs. Danvers represents the dead Rebecca as she fights to keep the presence of her mistress alive as a way to make the narrator's life miserable. Mrs. Danvers' final crime to get rid of Rebecca's presence once and for all was because Rebecca decided to die without conferring with her. She felt left out by Rebecca's decision to leave her in pain from the loss. She fails to ensnare the narrator who goes on to live a happy marriage with Maxim whereas Iago and Kevin ensnare their victims forever. Eva is trapped in her new life without her husband and daughter. Othello is seen as the tragic hero as he lost his reputation and wife which led him to commit suicide. At the end of the play, Iago refuses to "speak word" which sustain Iago's power of manipulation as he doesn't let people know the real him. Also, he remains in control as he still has the power to manipulate people by the use of his language. On the other hand, Kevin believes he knows the reason behind his crime but as he faces his punishment, he starts to feel some remorse when he gave Eva his sister's glass eye and told her that he was "sorry". Whereas it could be his fear for the "real" jail as the junior one is tough enough for him. It could be argued that Kevin feels no remorse for his crime but only for himself. ...read more.