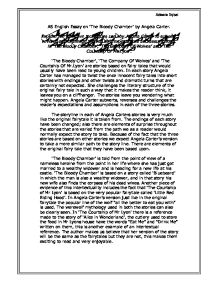 Explore the narrative techniques used by Angela Carter to subvert, reverse and challenge the reader's expectations and assumptions, in 'The Bloody Chamber', 'The Company Of Wolves' and 'The Courtship Of Mr.Lyon'.

AS English Essay on 'The Bloody Chamber' by Angela Carter. Explore the narrative techniques used by Angela Carter to subvert, reverse and challenge the reader's expectations and assumptions, in 'The Bloody Chamber', 'The Company Of Wolves' and 'The Courtship Of Mr.Lyon'. 'The Bloody Chamber', 'The Company Of Wolves' and 'The Courtship Of Mr.Lyon' are stories based on fairy tales that would usually have been read to young children. In each story Angela Carter has managed to twist the once innocent fairy tales into short stories with endings and other twists and dramatic turns that are certainly not expected. She challenges the literary structure of the original fairy tale in such a way that it makes the reader think, it leaves you on a cliffhanger. The stories leave you wondering what might happen. Angela Carter subverts, reverses and challenges the reader's expectations and assumptions in each of the three stories. The storyline in each of Angela Carters stories is very much like the original fairytale it is taken from. The endings of each story have been changed; also there are elements of surprise throughout the stories that are varied from the path we as a reader would normally expect the story to take. ...read more.

The character changes and we see she is not the same character that we were introduced to at the beginning of the story that was living with her mother with very little money. 'The Courtship of Mr Lyon' also has the same effect upon the once poor, humble and innocent little girl. At first we see the girl and her father as being very poor, the girls only want was 'a single white rose'. Throughout the story we see that she becomes vain and spoilt. From this innocence it goes on to say later on 'they had planned a delicious expedition to buy her furs and she was eager for the treat as any girl might be', it also quotes 'She took off her earrings in front of the mirror; beauty. She smiled at her self in satisfaction', these are signs of her transformation into a different character; a more vain and spoilt character. In the 'Company Of Wolves' the main character is also female, and just like the other two stories the female character also changes. In 'The Company Of Wolves' it is more to do with her strange unexpected behaviour that challenges our expectations. In this story the female has a more dominant role. ...read more.

The white rose, which was the only desore of beauty in 'The Courtship Of Mr.Lyon', is also symbolism, a rose is a symbol of beauty but its stems has thorns. All the above-mentioned use of symbolism also challenge and reverse our expectations to an extent they give us clues to what may happen later on in the story but the story takes a different path. For example, in 'The Bloody Chamber', the mention of the white lilies, the ruby choker and later on the discovery of the marquises previous wives lead us to believe that the new wife has landed herself in danger but in the end it is the shock appearance of her mother which leads to the Marquis' being killed and not the woman he was married to. All the mentioned narrative techniques play around with the version of the story and have stored in our head from childhood, and if we do not already know and recognise the story then we follow what we would expect to happen, the path a fairytale would take. In Angela Carter's versions of the stories she takes the reader of the path a traditional story would take. The modification and altering in the storylines of each story make it enjoyable to read and they challenge, subvert and reverse our expectations. Adeele Iqbal ...read more.

This essay shows potential in the way it quickly acknowledges that Carter subverts common fairytales. A useful quote to have used in this essay is from Angela Carter herself saying she is "extracting the latent" content from fairytales, allowing you ...

This essay shows potential in the way it quickly acknowledges that Carter subverts common fairytales. A useful quote to have used in this essay is from Angela Carter herself saying she is "extracting the latent" content from fairytales, allowing you to argue that Carter is challenging society and moral values. There are times where this essay repeats itself or doesn't get to the point . For example "The author uses many narrative techniques to challenge and reverse our expectations as a reader. " adds nothing to the argument. There is no indication of what these narrative techniques are, or an explanation of how they challenge our expectations. A more succinct style would make this argument more convincing.

The analysis is good, but there needs to be more explanation as some comments tend to be asserted. For example the discussion around intertextuality is very relevant, yet comments such as "The author makes us believe that her version of the story will be the same as the fairytales but they are not, this makes them exciting to read and very enjoyable." are not explained. There is no explanation of why intertextuality makes them exciting to read. I'm not quite sure how symbolism can ever be unexpected in a novel, but this paragraph shows potential. Examiners love to see symbols analysed, yet there is no discussion of how the symbols affect the reader. I would've liked to have seen some consideration of the graphic imagery "like an extraordinarily precious slit throat" and how such descriptions make Carter's texts gothic. I would've liked to have seen more discussion around the gothic element of her texts, looking at how Carter explores taboo and subverts society's views of women and patriarchy. To really elevate this essay into the higher bands, there must be discussion of genre and how the text is received by readers. There is minimal discussion of reader response beyond the repeated statement "reader's views are challenged". Examiners like to see insightful and fresh ideas, yet by just stating what techniques are used you are not showing consideration of multiple interpretations. The paragraph looking closely at fantasy and the familiar is a strong idea, but this isn't explained whatsoever. There is no consideration of how magical realism is used to show a rejection of society, or how using fantasy allows taboo and moral wrongs to seem acceptable.

This essay has a very average structure. There are points which are repeated in a number of paragraphs, and there doesn't seem to be any flow to the argument. The introduction doesn't really introduce an argument, but simply rephrases the question. A good introduction will summarise the techniques used whilst posing a starting point for an insightful and cogent argument. Similarly, the conclusion simply repeats the question. There is no discussion of why Carter subverts the familiar, and for this reason this essay lacks the depth a strong essay would. Spelling, punctuation and grammar are fine, but it's frustrating to see Carter wasn't always capitalised.