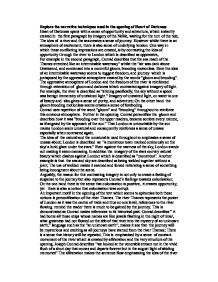 Explore the narrative techniques used in the opening of &quot;Heart of Darkness&quot;.

Explore the narrative techniques used in the opening of Heart of Darkness Heart of Darkness opens with a sense of opportunity and adventure, which instantly created in the first paragraph by imagery of the Nellie, waiting for the turn of the tide; The idea of a river and the sea creates a sense of journey. However whilst there is an atmosphere of excitement, there is also sense of underlying tension. One way in which these conflicting impressions are created, is by contrasting the idea of opportunity through the river to London which is described as oppressive,. For example in the second paragraph, Conrad describes that the sea reach of the Thames stretched like an interminable waterway" whilst the "air was dark above Gravesend, and condensed into a mournful gloom, brooding motionless. Here the idea of an interminable waterway seems to suggest freedom, and journey which is juxtaposed by the oppressive atmosphere created by the words "gloom and brooding". ...read more.

The idea of the natural and the unnatural is used throughout to emphasise a sense of unease about; London is described as "a monstrous town marked ominously on the sky/ a lurid glare under the stars." Even against the vastness of the sky, London stands out making it seem menacing. In addition the imagery of the stars convey natural beauty which clashes against London which is described as "monstrous". Another example is that the sea and sky are described as being welded together without a joint; The use of welded makes it seemed and forced reiterating a sense of something being incongruent about the scene. Arguably, the reason for this contrasting imagery is not only to create a feeling of suspense to the journey but also represents Conrad's feelings towards colonisation; On the one hand there is the sense that colonisation is positive, it creates opportunity, yet there is also a notion that colonisation was corrupt. ...read more.

Joseph Conrad describes "we looked at the venerable stream not in the vivid flush of a short day that comes and departs forever but in the august light of abiding memories" The alliteration makes the sentence flow emphasising the idea of the river being continuous rather than a " vivid flush" and emphasising an idea of endless opportunities which can add to the "august of abiding memories". This all adds to a feeling of optimism and idea of colonialism being positive. The very structure of the text also seems to mimic the continuity of the river by switching from the past to present, creating a nostalgic feel. For example, after the paragraph about the adventures of the men who had made the nation proud, the next paragraph switches to the sun setting. However, the use of the river as representing the power of London also reminds the reader of the " monstrous town" thus creating a negative impression. ...read more.