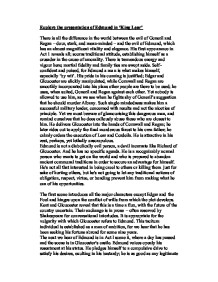 Explore the presentation of Edmund in 'King Lear'

Explore the presentation of Edmund in 'King Lear' There is all the difference in the world between the evil of Goneril and Regan - dour, stark, and mean-minded - and the evil of Edmund, which has an almost magnificent vitality and elegance. His first appearance in Act 1 reveals all; scorns traditional attitude, establishing himself as a crusader in the cause of amorality. There is tremendous energy and vigour here; martial fidelity and family ties are swept aside. Self-confident and poised, for Edmund a man is what makes himself, especially 'by wit'. His pride in his cunning is justified; Edgar and Gloucester are slickly manipulated, while Cornwall and Regan are smoothly incorporated into his plans other people are there to be used; he uses, when suited, Goneril and Regan against each other. Yet nobody is allowed to use him, as we see when he fights shy of Goneril's suggestion that he should murder Albany. Such single mindedness makes him a successful military leader, concerned with results and not the niceties of principle. Yet we must beware of glamourising this dangerous man, and remind ourselves that he does callously abuse those who are closest to him. He delivers Gloucester into the hands of Cornwall and Regan; he later rides out to apply the final murderous thrust to his own father; he calmly orders the execution of Lear and Cordeila. He is attractive in his zest, perhaps, yet lethally unscrupulous. ...read more.

But his willingness to betray his father indicates just how much he sees other people merely as instruments to be manipulated to his own ends. Edmund claims that the letter is written by Edgar; the letter complains that the young are denied their inheritance for too long, and suggests that Edgar and Edmund should meet to discuss this. Gloucester takes the bait and curses Edgar, whom Edmund pretends to defend, suggesting an arranged test of his loyalty. We see the transition to prose for the conversational exchanges - and Edmund's masterly pose as the respectful son. His performance with the letter is compelling; allowing a brief sight to arouse curiosity, feigning unwillingness to reveal the contents while hinting at their sinisterness, and pretending to defend Edgar, yet blackening his name. The letter focuses upon a central theme; the transfer of power and wealth from the old to the young. It is re-emphasised in Edgar's alleged view that 'sons at perfect age, and fathers declined, the father should be as ward to the son, and the son manage his revenue'. The views, of course, are Edmund's, and will find a harsh echo in the mouths of Goneril and Regan. After the exit of Gloucester, Edmund's philosophy is again projected in his scathing dismissal of his father's beliefs. For him, the stars have no significance; man is what he makes himself, no more, no less. This adds point to his cynical aping of his father after the entry of Edgar. ...read more.

and his capable management of his own fate. The reader comes to deplore Edmund's means, but, hoping for a redemption of Edmund and grasping for a positive message from the play, the reader sees compassion in Edmund's final words, compassion that likely does not exist. Of all of the play's villains, Edmund is the most complex and sympathetic. He is a consummate schemer, a Machiavellian character eager to seize any opportunity and willing to do anything to achieve his goals. However, his ambition is interesting insofar as it reflects not only a thirst for land and power but also a desire for the recognition denied to him by his status as a bastard. His serial treachery is not merely self-interested; it is a conscious rebellion against the social order that has denied him the same status as Gloucester's legitimate son, Edgar. He is the ultimate self-made man, and he is such a cold and capable villain that it is entertaining to watch him work. Only at the close of the play does Edmund show a flicker of weakness. Mortally wounded, he sees that both Goneril and Regan have died for him, and whispers, "Yet Edmund was beloved". After this ambiguous statement, he seems to repent of his villainy and admits to having ordered Cordelia's death. His peculiar change of heart (rare among Shakespearean villains) is enough to make the audience wonder, amid the carnage, whether Edmund's villainy sprang not from some innate cruelty but simply from a thwarted, misdirected desire for the familial love that he witnessed around him. ...read more.