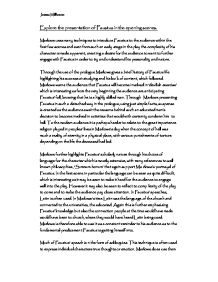 Explore the presentation of Faustus in the opening scenes.

Explore the presentation of Faustus in the opening scenes. Marlowe uses many techniques to introduce Faustus to the audience within the first few scenes and even from such an early stage in the play the complexity of his character is made apparent, creating a desire for the audience to want to further engage with Faustus in order to try and understand his personality and nature. Through the use of the prologue Marlowe gives a brief history of Faustus life highlighting his success at studying and his lack of content, which followed. Marlowe warns the audience that Faustus will become involved in 'devilish exercise' which is interesting as from the very beginning the audience are anticipating Faustus' fall, knowing that he is a highly skilled man. Through Marlowe presenting Faustus in such a detached way in the prologue, using just simple facts, suspense is created as the audience await the reasons behind such an educated man's decision to become involved in activities that would with certainty condemn him to h**l. ...read more.

Marlowe does use them for this purpose to some extent but they seem to reveal more about Faustus character as in them he is continuously evaluating himself. Such soliloquies are interesting devices of Marlowe's as they can be interpreted in so many different ways. Perhaps Faustus can be seen as mad, talking to himself, to an audience in Marlowe's time they may see this as most feasible, just because Faustus has even considered meddling in magic. On the other hand Faustus could be seen as stepping back and trying to assess himself from a detached position, which could be a good skill, yet only if done accurately, as we see it is not. Marlowe uses Faustus' own words to expose his weaknesses. For example in his initial speech the quotations he uses from the bible are selective, so as to give only a negatives view of religion. 'If we say we that we have no sin, We deceive ourselves, and there's no truth in us.' ...read more.

Marlowe shows this through having Faustus tell Mephastophilis to reappear in a different form, one more aesthetically pleasing, with less reminder of h**l. Even early on in the play Marlowe makes it clear that despite Faustus being so academic he is willing to be oblivious to things that contradict the world, as he wants to see it, despite its consequences. This concept is continued in that even the clown realises the soul is worth a lot, yet Faustus, a learned man does not feel he has paid too dearly. In the first few scenes Marlowe focuses on Faustus extensive academic knowledge, mainly through the use of language, to show how ones own ignorance can be the downfall of even the most educated. Faustus' reoccurring blindness to reality is continuously reinforced, as is the religious theme. Marlowe presents his audience with a character complex in their nature and in the issues concerning them, to such an extreme that the audience is left intrigued to discover why such a clever man does not manage to overcome his blindness and redeem himself. Jemma Millhouse ...read more.

Appropriate general issues are raised here, but are often not supported by close reference and quotation, which are essential when writing about literature.
More focus on the language of the text would help the writer reach more accurate and convincing interpretations.