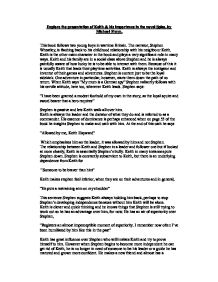 Explore the presentation of Keith &amp; his importance in the novel Spies, by Michael Frayn.

Explore the presentation of Keith & his importance in the novel Spies, by Michael Frayn. This book follows two young boys in wartime Britain. The narrator, Stephen Wheatley, is flashing back to his childhood relationship with his neighbour Keith. Keith is the other main character in the book and plays a very significant role in many ways. Keith and his family are in a social class above Stephen and he is always painfully aware of how lucky he is to be able to interact with them. Because of this it is usually Keith that leads their playtime activities. Keith is always the instigator and inventor of their games and adventures. Stephen is content just to be the loyal sidekick. One adventure in particular, however, starts them down the path of no return. When Keith says "My mum is a German spy" Stephen valiantly follows with his servile attitude, here too, wherever Keith leads. Stephen says: "I have been granted a modest foothold of my own in the story, as the loyal squire and sword bearer that a hero requires" Stephen is passive and lets Keith walk all over him. ...read more.

He makes a new friend and almost has a girlfriend which basically leaves Keith behind because he is an outcast and has been ostracized for the entirety of the book. Keith has an under developed character and is anti-social, he also has very adult like qualities which make him seem almost peculiar. His maturity allows him an advantage over Stephen to begin with but when Stephen begins to develop his own independence and maturity like a normal child Keith loses this. Keith was, however, important to Stephen's development and to him becoming more independent. Keith was important to Stephen's growing up and at first Stephen does not want to let go of him. There is a loss of innocence in Stephen, but it is a gradual loss, a slipping away as his and Keith's relationship also changes A large aspect of Stephen and Keith relationship seems to be based on class issues. There is the feeling throughout the first five chapters that Stephen feels subordinate to Keith because of his families' status in The Close. ...read more.

His ways of thinking have been influenced by his father obviously. In particular his attitude towards women which has taken a misogynistic turn evident in the way he is happy to accuse his own mother of being a German spy. This is no doubt taken from his Father's treatment of his mother, he is abusive towards her and Keith perceives this as ok or he becomes used to it as the norm because he knows no different. His actions and his behavior are also heavily influenced by his father. His violent behavior like when he threatens Stephen with a knife and his violent attitude on several other occasions are influenced by his father and his father taking part in the war, the influence of wartime "He won a medal for killings" Keith sees something as violent as killing being rewarded will clearly have a negative affect on his behavior and what he sees is right and wrong in terms of physical and perhaps mental violence. Keith idolises his father and mimics his violence in which frayn is underlining and highlighting the fact that parents are role models for their children and their behavior must reflect how their children should grow up to act, therefore warning parents against violence. ...read more.