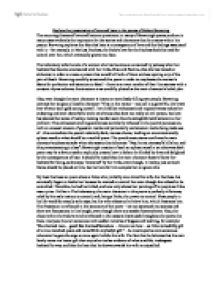 Explore the presentation of love and hate in the poems of Robert Browning The recurring themes of love and hate are prominent in many of Browning's poems, and are in many cases evidently the inspiration for the stories and characters that he creates within his poetry. Browning explores the idea that hate is a consequence of love and the feelings associated with it - for example, in My Last Duchess, the Duke's love for the Duchess fuels his need for control over her, which eventually grows into hate. The Laboratory tells the tale of a woman who has become so consumed by jealousy after her husband has become enamoured with her rivals, Elise and Pauline, that she has visited an alchemist in order to create a poison that would kill both of them without sparing any of the pain of death. Browning carefully structured this poem in order to emphasise the woman's desire for perfection and attention to detail - there is an even number of four-line stanzas with a constant rhyme scheme; the structure is as carefully plotted as the main character's lethal plan. ...read more.

Unlike in The Laboratory, the main character in this poem is perfectly villainous, ruled by his male instinct to control, and, being a Duke, the power to control. Most people in his life would do exactly as he says, but his wife refuses to be below him, which frustrates him. This frustration is reflected in the structure of the poem - it's not separated into stanzas and there are fluctuations in line length, even though there is a steady rhyme scheme. Also, the chaos within the Duke's mind is reflected in the caesura that's used throughout the poem; the Duke interjects his own sentences with sudden remarks of disgust and loathing, for example: "She thanked men, - good! But thanked/Somehow - I know not how - as if she ranked/My gift of a nine-hundred-years-old name/With anybody's gift." - he interrupts his own sentences whenever he gets the urge to once again belittle his wife. The fact that he believes that his own family name is a better gift than any other is also evidence of what a selfish, inadequate husband he was, and that the hate that he shows towards his wife is unjustified. ...read more.

because of the large amount of exclamation marks and informal manner of speech, for example: "But suppose she says,- Never mind that youth!". The last line of the eleventh stanza is an interesting one: "No hero, I confess.", because it is so short, yet it is where he realises that toying with peoples emotions because of his own beliefs is a bad thing to do, and it dawns on him quickly. The last stanza has been included by Browning to show that the things that happen in his poems can and do happen in every day life, or perhaps because this event happened to Robert Browning himself, but he didn't want to be associated with the man in the poem. In conclusion, Browning's poems explore the many consequences of love and hate - in The Laboratory, jealousy emerges from love and fuels hate; in My Last Duchess, love creates an unhealthy need for control, and in A Light Woman, love is prevented from happening because of hate, which breeds more hate. Browning shows this through his use of language, form and structure, influencing the reader to feel certain emotions at specific points throughout his poems. ...read more.