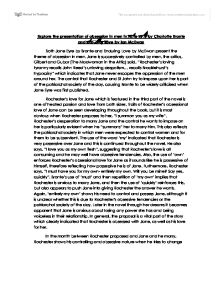 Explore the presentation of obsession in men in Jane Eyre by Charlotte Bronte and Enduring Love by Ian McEwan Both Jane Eyre by Bronte and Enduring Love by McEwan present the theme of obsession in men. Jane is successively controlled by men, the critics, Gilbert and Gubar (The Madwoman in the Attic) said, "Rochester's loving tyranny recalls John Reed's unloving despotism... recalls Brocklehurst's hypocrisy" which indicates that Jane never escapes the oppression of the men around her. The control that Rochester and St John try to impose upon her is part of the patriarchal society of the day, causing Bronte to be widely criticised when Jane Eyre was first published. Rochester's love for Jane which is featured in the third part of the novel is one of heated passion and love from both sides. Traits of Rochester's obsessional love of Jane can be seen developing throughout the book, but it is most obvious when Rochester proposes to her, "I summon you as my wife". Rochester's desperation to marry Jane and the control he wants to impose on her is particularly evident when he "summons" her to marry him. This also reflects the patriarchal society in which men were expected to control women and for them to be subservient. The use of the word 'my' indicated that Rochester is very possessive over Jane and this is continued throughout the novel. ...read more.

The monosyllabic sentence McEwan uses suggests that Parry says it so simply that Parry completely believes it to be true. Rochester also believes his love of Jane to be real, but from the outside, it is easy to question it. Jane encounters another controlling and obsessive character in St John Rivers, but he is obsessed with controlling everything around him, including Jane. The first, and most obvious attempt to control everything is in chapter thirty-two, " 'go on for another quarter of an hour' And he actually took out his watch and laid it upon the table to measure the time". Bronte immediately creates a controlling character with obsessive tendencies. St John is presented to be cruel in his overwhelming devotion to religion and during their relationship shows no mercy in trying to control Jane and to force her to do what he wants. This rigidity and coldness is reflected in the ice imagery used to describe him by Bronte as "cold as an iceberg". The use of a simile implies that St John is completely emotionless and he is repeatedly described as cold to suggest his repression. This also shows that St John definitely does not understand Jane's passionate nature which is described using the contrasting fire imagery. Moreover, both characters want more control over their future and are to a certain extent obsessed by it. ...read more.

Throughout the novel, Bronte presents religious men in a negative way, both St John and the hypocrite Mr Brocklehurst in chuildhood. The critics Gibert and Gubar (The Madwoman in the Attic) said that "St John has an almost blatantly patriarchal name" and this symoblises his power as a man and his religious zeal. Parry attempts to use religion in Enduring Love to gain Joe as his partner also, "I praise God He has sent me to you". In contrast to Jane Eyre, Parry uses religion to persuade Joe and to rejoice at their 'relationship', whereas St John uses religion to bully. Overall, religion is a vital theme in both books, which characters use either to control or to show their love. Overall, both Jane Eyre by Bronte and Enduring Love by McEwan possess the theme of obsession in the male characters. The differences of the books include when they were written, which leads to the reader being able to question if St John has a mental disorder, or even Rochester. The times also affect the ways in which the male characters could obsess, such as Parry using a telephone. But, the main question is if obsession ever even leads to happiness. The answer is an obvious no as Jane and Rochester only marry when the obsession has ended and Jed's obsession of Joe only leads to the destruction of Joe and Clarissa's relationship and Jed ending up in a mental hospital. Therefore, even love can not tolerate obsession, whether it be embraced or pushed away. ...read more.