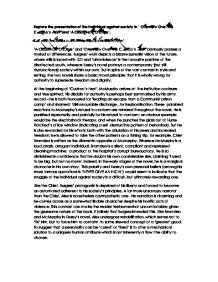 Explore the presentation of the individual against society in 'One Flew Over the Cuckoo's Nest' and 'A Clockwork Orange'.

Explore the presentation of the individual against society in 'One Flew Over the Cuckoo's Nest' and 'A Clockwork Orange'. 'He who marches out of line hears another drum.' 'A Clockwork Orange' and 'One Flew Over the Cuckoo's Nest' obviously possess a myriad of differences. Burgess' work depicts a bizarre surrealist vision of the future, where milk is laced with LSD and 'ultraviolence' is the favourite pastime of the disaffected youth, whereas Kesey's novel portrays a contemporary (but still dysfunctional) society within our own. But in spite of the vast contrast in style and setting, the two novels share a basic moral principle: that it is wholly wrong for authority to supersede freedom and dignity. At the beginning of 'Cuckoo's Nest', McMurphy arrives at the institution cocksure and free-spirited. His disdain for authority is perhaps best summarized by his army record - he is both honoured for 'leading an escape from a Communist prison camp' and shamed: 'dishonourable discharge...for insubordination. These polarized reactions to McMurphy's refusal to conform are mirrored throughout the novel. He is punished repeatedly and painfully for his refusal to conform; an obvious example would be the electroshock therapy, and when he punches the glass out of Nurse Ratched's office window (indicating a self-destructive pattern of behaviour). But he is also rewarded for his efforts: both with the adulation of his peers and increased freedom; he is allowed to take the other patients on a fishing trip, for example. ...read more.

Herod that is Nurse Ratched, it could also be argued that Kesey intends to viciously parody the Christian government and its social order by making his Jesus figure a swearing, drinking, almost-convicted rapist. In spite of this possibility (it would certainly be in line with Kesey's deep resentment of the social order) the serious nature of the novel would seem to indicate the former. Joseph Waldmeir perhaps summarised the character best: 'individualistic to the point of disaffiliation, but...altruistic to the point of self-sacrifice'. The abuse of authority by those in power is a recurring theme in both novels. In 'A Clockwork Orange', the rehabilitative efforts of the Government are directed towards submission rather than true reform of character. They are prepared to sacrifice the basic human right to free choice for 'a quiet life'. Alex, perceived by the state as a misfit psychopath, is treated inhumanly, referring to his 'rehabilitation' as a 'new form of torture'. By attempting to force him to adhere to their standards, the state is instead leaving him vulnerable to abuse. Tellingly, Burgess makes what the government officials say absolutely clear (in standard English), but dilutes the gravity of Alex's crimes by having him speak in Nadsat (a deadly razor-blade is a 'cut-throat britva, sexual intercourse is 'the old in-out in-out'). The Minister of the Interior best represents the government's corruption; he doesn't sincerely want criminals reforming- he considers it a helpful by-product of his scheme to clean out jails and make room for political dissidents (who, by our standards would be free to protest). ...read more.

Kesey's opinion on the constant struggle between individuality and submission to authority was that one should never compromise or yield to the people in charge of society (his anarchistic tendencies were documented colourfully in Tom Wolfe's 'Electric Kool-Aid Acid Test). He saw society as he wrote it; corrupt, self-interested and detrimental to people' welfare - demonstrated in the depiction of the 'Combine' and Nurse Ratched, its sinister agent. The rendering of the system as polluted and fascist appealed to the 'hippie' movement of the sixties enough to secure a Broadway play and an inarguably more popular film adaptation (which eschews Bromden's narration and schizophrenia) . In contrast, Burgess seems to hesitantly accept the system itself (Alex admits that 'you can't have everybody behaving in my manner of the night') but is concerned with the danger of officials abusing their power over those in it. He also relates his story in a somewhat more straightforward way; whilst Kesey uses metaphor frequently (the Christ allusions, the 'fog' enshrouding Bromden), Burgess' uses a foul protagonist to better accentuate the foul government, but also makes him charming and sophisticated to better accentuate the charmless and inhuman government . In spite of these differences in overall presentation, character, and environment, the struggle of the individual against society is uncompromisingly presented in both novels and neither Kesey nor Burgess understated its importance. They have endured as compelling treatises on both the dangers of over-mighty governance, and served as effective warnings against the consequences of restricting personal freedom. ...read more.