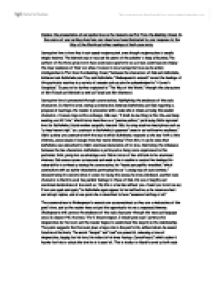 Explore the presentation of unrequited love in the Sonnets and Far From the Madding Crowd. In the course of your writing show how your ideas have been illuminated by your response to the Way of the World and other readings of both core texts.

Explore the presentation of unrequited love in the Sonnets and Far From the Madding Crowd. In the course of your writing show how your ideas have been illuminated by your response to the Way of the World and other readings of both core texts. Unrequited love is love that is not openly reciprocated, even though reciprocation is usually deeply desired. The beloved may or may not be aware of the admirer's deep affections. The authors of the three given texts have used male superiority as an ironic contrivance to display the inner weakness of their s*x when it comes to love. Unrequited love can be widely distinguished in "Far from the Madding Crowd," between the characters of Oak and Bathsheba, Boltwood and Bathsheba and Troy and Bathsheba. "Shakespeare's sonnets" reveal the feelings of this particular emotion in a variety of sonnets and can also be acknowledged in "A Lover's Complaint." ...read more.

From this, it can be seen that Bathsheba was untouched by Oak's emotional declaration of his love, illustrating the imbalance between the two characters. Bathsheba is portrayed as being more experienced in this particular field, giving her an advantage over Oak in terms of her attitude to his emotional distress. Oak comes across as innocent and weak as he is unable to control his feelings. His vulnerability is evident as during the conversation, his "hands perceptibly trembled," which contradicts with an earlier description portraying him as "a young man of easy motions," demonstrating his anxiety when it comes to facing the woman he loves. Boldwood, another male character in Hardy's novel has parallel feelings to those of Oak. His use of lengthy and emotional declarations of love such as, "My life is a burden without you...I want you to let me say I love you again and again," to Bathsheba again appear to be ...read more.

He refers to his lover having a "proud heart," which makes it harder for him to attain the love he is in need of. This is similar to Hardy's novel as both male characters are desperate to have their love returned to them, however both females appear to be unsympathetic to their feelings. The two authors use the interchange as a tool to display the true nature and disparity between the two parties. This is illuminated in Congreve's play, in Act One Scene One, when Mirabell and Fainall discuss Mirabell's rejection by Millamant. During a game of cards with Fainall he is described as being "reserved" and "pulled out of humour," suggesting that he is distraught, a similar portrayal to that of Oak and the poet after being let down by the women they love. As the conversation progresses between the audience learns that Mirabell's change in attitude has been caused by the callous actions of Millamant, the woman he loves. The male's weakness in matters of love is highlighted through this interchange. ...read more.