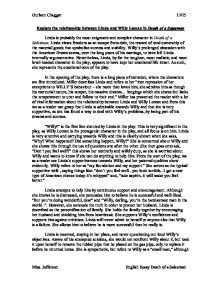 Explore the relationship between Linda and w***y Loman in Death of a Salesman.

Explore the relationship between Linda and w***y Loman in Death of a Salesman Linda is probably the most enigmatic and complex character in Death of a Salesman. Linda views freedom as an escape from debt, the reward of total ownership of the material goods that symbolise success and stability. w***y's prolonged obsession with the American Dream seems, over the long years of his marriage, to have left Linda internally argumentative. Nevertheless, Linda, by far the toughest, most realistic, and most level-headed character in the play, appears to have kept her emotional life intact. As such, she represents the emotional core of the play. In the opening of the play, there is a long piece of narration, where the characters are first introduced. Miller describes Linda and refers to her "iron repression of her exceptions to w***y'S behaviour - she more than loves him, she admires him as though his mercurial nature, his tamper, his massive dreams... longings which she shares but lacks the temperament to utter and follow to their end." Miller has presented the reader with a lot of vital information about the relationship between Linda and w***y Loman and from this we as a reader can grasp that Linda is admirable towards w***y and that she is very supportive, as she has found a way to deal with w***y's problems, by being part of his dreams and success. ...read more.

Linda is reserved, staying in her place, and never questioning out loud w***y's objectives. Aware of his attempted suicides, she would not confront w***y about it, but took it upon herself to remove the rubber pipe that he placed on the gas pipe, only to replace it before he returned home. She is sympathetic, but refers to w***y as a "small man," although she states "but he is a human being and a terrible thing is happening to him, so attention must be paid!" After his death Linda states "w***y dear, I can't cry, why did you do it?" Linda has never been able to understand w***y; he will forever remain a mystery to her. Through Linda's extreme support, her husband's downfall resulted. Linda was aware of this, yet she did not say nor do anything to help him. She plays a significant role in the downfall of her husband. Furthermore, Linda is the eternal wife and mother, and the fixed point of affection both given and received. She is also the woman who suffers and endures, and in many ways, the earth mother who embodies the play's ultimate moral value, love. ...read more.

She is very keen on "family life". She does not really have any friends, and so her life revolves around her family - and this is why it is important to her for them all to get along with one another. Also, looking back at act one; we are aware of the close relationship that Biff and w***y had. Linda says to Biff, "What happened to the love you had for him? You were such pals! How you used to talk to him on the phone every night! How lonely he was till he could come home to you!" This is what Linda is trying to regain - the love between her son, Biff, and her husband, w***y. Lastly, Linda is a character driven by desperation and fear. Even though w***y is often rude to her and there is the possibility that Linda suspects w***y may have had an affair, she protects him at all costs. According to Linda, w***y is "only a little boat looking for a harbour." She loves w***y, and more importantly, she accepts all of his shortcomings. She would rather play along with his fantasies of grandeur, or the simple ones like building a garden and growing fresh vegetables, than to face the possibility of losing him. ?? ?? ?? ?? Gurleen Chaggar LVI5 Miss. Jefferson English Essay Death of a Salesman ...read more.